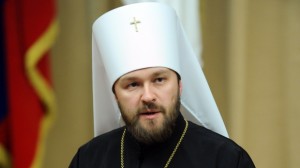 The Russian Orthodox Church’s chief ecumenical official said that “secularization in disguise of democratization” is leading Western nations toward totalitarianism, according to a report from the Russian news agency Interfax.

“This powerful energy today strives to finally break with Christianity, which controlled its totalitarian impulses during 17 centuries,” said Metropolitan Hilarion. “Eventually, it unconsciously strives to set up an absolute dictatorship that demands total control over each member of society. Don’t we move to it when ‘for the sake of security’ we agree to obligatory electronic passports, dactyloscopy [fingerprint identification] for everyone, and photo cameras occurring everywhere?”

In legalizing same-sex marriage, France “consciously and demonstratively ignored demands of people and used tear gas to disperse them,” Metropolitan Hilarion said as he criticized efforts to make “immorality normal.”