Russian Orthodox Patriarch Kirill arrived in Jerusalem on Friday on his first visit to the Holy Land since becoming head of the powerful church in 2009, an AFP correspondent said. As his motorcade arrived at the Old City’s Jaffa Gate, he was welcomed by a choir of Russian women and leaders of the Greek Orthodox church, as well as members of the Coptic and Armenian churches. 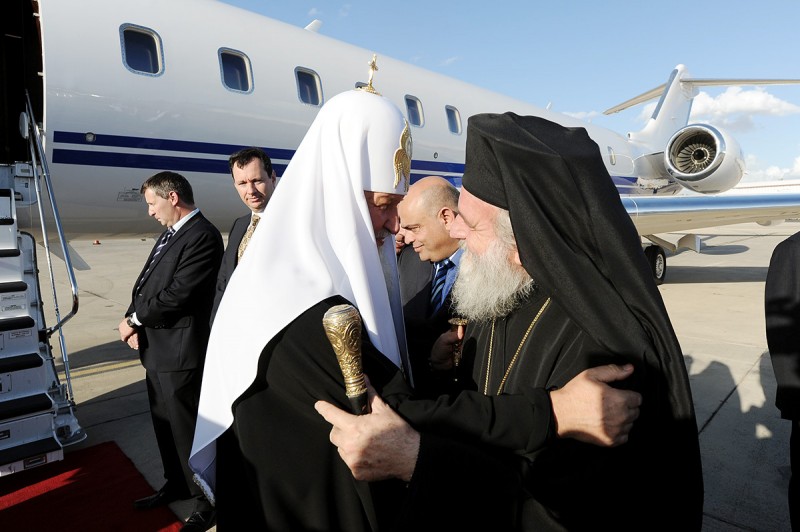 Accompanied by heavy Russian and Israeli security, Kirill was led to the home of Jerusalem’s Greek Orthodox Patriarch Theophilos III, who welcomed him and proceeded to accompany him to the nearby Church of the Holy Sepulchre. The short distance to the church was scented with incense burnt by shop owners in honour of the event. Hundreds of Russian pilgrims eagerly awaited the arrival of their patriarch at the church.

During his visit, Kirill will be meeting Israeli President Shimon Peres, Palestinian president Mahmud Abbas and King Abdullah II of Jordan in a new sign of his importance as a global religious figure. His trip “is the most important (religious) visit (to Israel) since that of the Pope Benedict XVI” in 2009, Israel’s foreign ministry said.

Over the course of his six-day stay, Kirill, 65, is due to celebrate the liturgy with Theophilos and meet other local Christian leaders. He will travel to the Church of Nativity in Bethlehem, and visit Russian churches in Ein Karem and on the Mount of Olives. Kirill will meet with Israel’s chief rabbis, and visit the Yad Vashem Holocaust museum in Jerusalem. He will travel to Mount Tabor in northern Israel and visit Nazareth and Tiberius, as well as the nearby Church of the Twelve Apostles. He will then cross over to Jordan.

Spokesman of the Russian Orthodox Church, Father Alexander Volkov, told AFP the “visit has not and cannot have a political aspect.” But Kirill’s presence could help sort out a local problem in favour of the church, involving the Church of the Holy Sepulchre, located on the site where most Christians believe Jesus was crucified, buried and resurrected. A dispute with an Israeli water company over unpaid bills has prompted the Greek Orthodox church, which is a joint custodian, to threaten to close it.