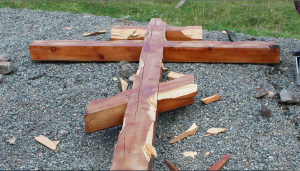 MOSCOW, August 16 (RIA Novosti) – The chief editor of a controversial newspaper and shamanism enthusiast from a southern Siberian republic was sentenced Friday to 1 ½ years of “restriction of freedom” for felling an Orthodox Christian cross, prosecutors said.

Last September, Valery Chekonov sawed down a wooden cross that had been erected in the village of Topuchaya in the Altai Republic to commemorate the men who built a road that links Russia and Mongolia.

During his trial, Chekonov claimed that he mistook the cross for a hitching post and sawed it down because he was concerned about traffic safety. But prosecutors said Chekonov was driven by religious hatred and “felled the cross, stomped on it and hit it with an ax many times,” according to a statement posted on the Altai Prosecutor’s Office website.

The Shebalinsky district court sentenced Chekonov to 18 months “restriction of freedom” and said he will not be allowed to leave his residence at night, to leave his district or attend public events, or change his job or place of residence without notifying the authorities, the statement said.

In January, the Gorno-Altaisk city court condemned nine articles published in Chekonov’s Amadu Altai newspaper as “extremist” because they published texts expressing religious hatred toward Buddhism, the dominant religion in the neighboring Russian republic of Tuva and Mongolia.

Last October, Chekonov was sentenced to 160 hours of community service for preaching the supremacy of the “traditional Altai faith.”

About 13 percent of Altai residents adhere to traditional local cults that practice shamanist rituals, according to religions monitor Sreda.org.

Prosecutors said Chekonov is part of the unregistered Karakol Initiative Group whose members adhere to “traditional Altai beliefs.” Two members of the group were convicted and given suspended jail terms of eight months and one year for inciting religious hatred of Muslims and Buddhists, prosecutors said in 2008.