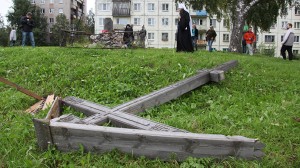 A worship cross, dedicated to the memory of victims of political repressions in Arkhangelsk, cut down by unidentified vandals. (RIA Novosti)

A group of activists connected with the Russian Orthodox Church are setting up a center against atheist extremism which, according to them, is promoted mainly by foreign-sponsored organizations.

The decision was announced this week at a meeting between city residents and deputies of a district council that was held near the pilgrimage center of the Moscow Patriarchate, in south-west Moscow.

“The atheist extremism is currently rearing its head. It is sponsored by various funds and NGOs with roots outside Russian borders,” reads the first statement released by the new movement.

The group claims that their enemies are opposing citizens’ lawful right for freedom of thought, conscience and religion, guaranteed by the Constitution.

In particular, the activists listed incidents when certain people protested against the construction of new churches, “creating an artificial psychosis and pumping up hysteria by intimidating the public”, quoting non-existent laws  and declaring all public discussions unlawful.

The statement emphasized the fact that atheist extremists were often acting on behalf of local residents by creating grassroots groups, but the real masterminds preferred to remain in the dark.

The Moscow City authorities together with the Russian Orthodox Church are currently implementing the so called “Program-200” – a plan according to which 200 Orthodox churches must be erected throughout the capital in the next 10 to 15 years. Russian mass media estimated the overall budget of the program at about $1 billion and financing comes from a non-government fund. The authors of the program claimed that after it is implemented there will be a church for every 20,000 residents located 1 kilometer or less from residential areas.

The program is popular among the religious lobby but it has already met resistance. The Communists and the veteran pro-democracy party, Yabloko, officially voiced protests against new churches and ordinary citizens also often claimed that such a large scale of construction was unnecessary.

In addition, the Program-200 is being carried out in times of especially sharp discourse between religious and agnostic parts of the Russian society. It first started in mass media but became much more real after several girls who called themselves feminist punk band Pussy Riot launched a short gig against the merger between the church and the state in Moscow’s main Cathedral of Christ the Savior.

The punks were put on trial and sentenced to two years each for aggravated hooliganism. After the incident Russian legislators passed a law on protection of believers’ feelings – making any public insult of an official religion a criminal offence punishable with up to three years behind bars.

The Pussy Riot trial and the fresh law prompted an even broader wave of protests across the country – sometimes taking radical forms, such as the felling of memorial crosses in several villages. More often, however, journalists and bloggers gave critical appraisal to the lush lives of church hierarchs and even ordinary clerics, like the case of Hegumen Timofey – a dean of one of Moscow churches who gained notoriety in mid-2012 by causing a major car crash while driving drunk in a BMW Z4 with diplomatic license plates.

In September 2012 the head of the Russian Orthodox Church, Patriarch Kirill said in a public speech that Christianity was under a concerted attack from forces who opposed the national revival of Russians, noting that the alleged merger between the church and the authorities was a deliberately created myth.