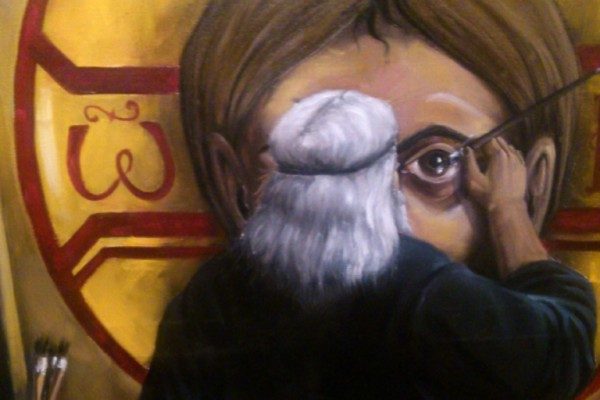 On the Sunday nearest October 11, Orthodox Christians celebrate the memory of the Holy Fathers of the Seventh Ecumenical Council. Sound boring? Better hold onto your seat, because this is a wild ride!

Nearly four hundred years after the establishment of the Christian Byzantine Empire, a movement of rigorist puritanism began to develop in the Church that viewed icons with disgust and was suspicious that symbolic material objects used in church might be idolatrous, and that those who venerate icons and appreciated Orthodox art were returning to paganism. This mindset was very popular among members of the court, who preferred esoteric philosophizing over engaged worship, and the members of the military, who were zealous to put down heresy.

Under the Emperor Leo III and his son Constantine V, a fifty-year period began wherein icons were destroyed, the interiors of churches were defaced, and those who defended or attempted to preserve icons were harshly oppressed, jailed, and tortured – most particularly the monastics. Iconoclasm had waned, but continued, under Leo IV, but at his death his wife, Empress Irene, boldly challenged the error of the previous three emperors and, against much opposition from the imperial court and army, defended icons and summoned an ecumenical council. Confirming the works of St. John of Damascus (In Defense of the Holy Images) and Patriarch Germanos, the council successfully returned the Church to its Orthodox faith, declaring:

We define that the holy icons, whether in color, mosaic, or some other material, should be exhibited in the holy churches of God, on the sacred vessels and liturgical vestments, on the walls, furnishings, and in houses and along the roads… Whenever these representations are contemplated, they will cause those who look at them to commemorate and love their prototype… which is in effect transmitted to the prototype; he who venerates the icon, venerates in it the reality for which it stands. We define also that they should be kissed and that they are an object of veneration and honor, but not of worship, which is reserved for Him Who is the subject of our faith and of divine nature.

Only about 25 years later, a new emperor, Leo V (watch out for those Leos!), renewed a shorter-livid but more violent attack against icons. Iconographers were arrested, tortured, and maimed, many having their hands cut off, and defenders of iconography were persecuted as never before. Persecution continued under the next emperor, Theophilus, but with his death another heroic woman, Empress Theododra, reversed the practice of iconoclasm, installed and icon-defending patriarch, Methodius, and established the first Sunday of Lent as a great and exceedingly popular feast of iconography, with street processions and colorful celebrations. Iconographers and defenders of icons were elevated as national heroes, the monastic ranks were honored as the true defenders of the faith and all the churches were restored to their former beauty. Once and for all, the use of icons as an ancient Christians tradition was settled.

As S. John of Damascus has summarized, the rejection of icons was at its root a Christological heresy – a rejection of the salvific work Christ’s Incaranation had accomplished and the sacramentality of matter established by God becoming man.

Next time you are in church, or at home where icons are displayed, remember those who suffered and died so that we could see Christ, His Mother, the saints, and angels depicted beautifully in spiritually enriching ways. Remember the boldness of faithful women who risked the condemnation of their peers for what was true. Hold an icon in your hand and ponder the reality that made icons worth dying for. If we take them for granted, we could end up losing them again.

Venerate an icon today and remember Saints Irene and Theodora! 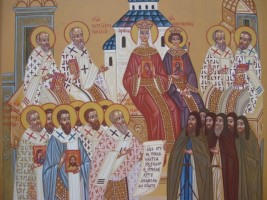 What the Fathers of the Seventh…
Archimandrite John Krestiankin (+2006)

“Most glorified art Thou, O Christ our God, Who hast established our Fathers as luminous stars…