Saint Macrina the Younger as a Model for our Lives 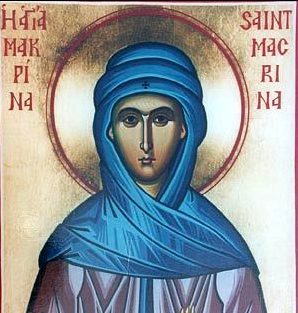 The venerable Macrina lived in the fourth century and was the sister of Basil the Great and Saint Gregory of Nyssa. The latter wrote her life, which is worth studying by all, because there is much to benefit from it. She was the first in a series of ten children by her parents and was the model and support for her younger siblings. Her father betrothed her, but before the wedding her fiance suddenly departed from this earth. Then the Saint thought it right to devote herself to God, and “her decision was more firm than her age.”

Saint Gregory of Nyssa calls her “great,” not because she was older in age, but because she had great spiritual stature. She was truly great in all things—in humility, in love, in discernment, in prudence and in bravery. This is why she was shown to be a teacher and spiritual guide of her siblings, and even of her mother, Saint Emmelia, who at the end of her earthly life became a nun in the monastery where Saint Macrina was abbess.

Saint Gregory of Nyssa writes in detail the conversation he had with her before her departure from this temporary life while she was sick in bed, as well as the events that followed her departure. Namely, the mourning of himself and the nuns, who were full of pain and sadness, as well as the hope of eternal life.

The life and disposition of the Venerable One gives us the opportunity to highlight the following:

First, the way Saint Macrina faced her sickness, the last moments of her earthly life and her impending death, shows the great value of the Orthodox faith, which is a way of life. It is the way of the life of the saints, as well as all those who desire and strive to achieve their personal sanctification.

When a person is sick and near the end of their earthly life, then their inner world is revealed, and all the hidden and closed things are brought to the surface. And if they had inner purity and those hidden things were virtues,  which were not seen due to their humility, then the last moments before their departure will be calm, peaceful and tranquil and they will depart praying. But if they pass their earthly life without repentance and dominated by their passions, then before their impending death they will be fearful, sad, disturbed, and instead of praying and preparing for the great journey, they will be occupied and speak of things that are related to this present “false” age, namely with their passions and sins, because “from the abundance of the heart the mouth speaks.”

The people of God abandon this life having prayed and prepared properly with Confession and Divine Communion and especially with the hope of eternal divine life. Saint Macrina was calm in the last moments of her earthly life, and she prayed while her face was so bright that it resembled that of an angel. “With a high mind she philosophized about those things that concern this life from the beginning to her last breath… and she said it must have been an angel who by economy took on a human form… and she made known to all her disposition and haste to go towards her desired One and to reach near Him quicker free from the shackles of the body… and having stopped speaking with us, she spoke prayerfully with God… Her prayer was such, that we do not doubt that she addressed God and He heard her” (St. Gregory of Nyssa).

Second, as we said above, Saint Gregory of Nyssa had a conversation with his sister Saint Macrina, that referred primarily to the mystery of death, the resurrection and eternal life. However, before this conversation began, Saint Gregory reports: “I then told her all about the personal troubles I had, earlier when the emperor Valens had driven me into exile for the faith and later when confusion reigned in the churches and drew me into disputes and wearisome effort. ‘Will you not put an end’, she asked, ‘to your failure to recognise the good things which come from God? Will you not compare your lot with that of your parents? And yet it is true that according to the standard of this world we can have great pride most of all in this that we were well born and from noble stock.’” She put him in is place, as we commonly say, saying that he should not complain, but to be grateful to God for His grace and the gifts he had been given.

Indeed, the prayers of parents are very important and play a prominent role in the life of each person. In one of the prayers said during the Mystery of Marriage this fact is emphasized when it specifically says: “The prayers of the parents support the foundation of the household.” Of course, this takes place especially when the parents are upright and true, because parents in fact are not those who give birth biologically, since this is done even by wild irrational animals, but true parents are those who regenerate their children, which means they raise them in “the education and admonition of the Lord” and take care for their spiritual rebirth, which is achieved by integrating them into the Church and empowering them with the way of life it provides. Such prayers of parents have great weight and are the cause for great Grace and rich gifts and blessings by the gift-giving Lord.

Saint Macrina emerged as a holy child of holy parents, a bright signpost and a true model for all those who desire their own personal sanctification and humbly seek her intercessions. She is commemorated on August 1/ July 19.