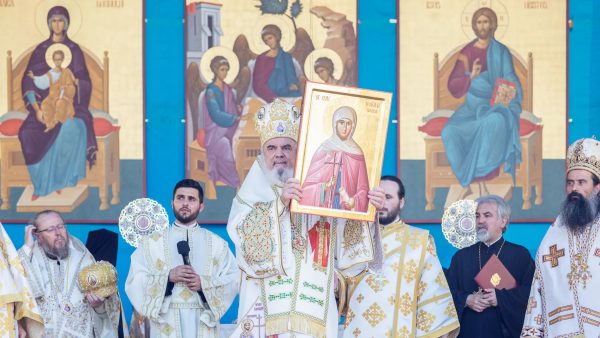 Marking the patronal feast of the Patriarchal Cathedral on Saturday, May 21, 2022, the historical proclamation of the sainthood of the Venerable Theophano Basarab took place. Saint Theophano is the first nun in history known to be of Romanian origin and the daughter of Prince Basarab I of Wallachia.

The canonization ceremony led by Patriarch Daniel took place in the context of the Solemn Year of prayer in the Church’s life and the Christian’s life and the Commemorative Year of the Hesychast Saints Symeon the New Theologian, Gregory Palamas and Paisius (Velichkovsky) of Neamț in the Romanian Patriarchate.

“In honour of these holy hesychasts, we include in the calendar of our Church and this holy, praying, hesychast woman of the fourteenth century,” Patriarch Daniel said before the reading of the Synodal Tomos.

St. Theophano was contemporary with St. Gregory Palamas and a disciple of St. Theodosius the Hesychast.

“We decide that, from now on and forever, the Venerable Saint Theophano Basarab be counted among the saints of the Church and be remembered with hymns of praise on her feast day, October 28 every year, and be inscribed in Synaxarium, in the liturgical books, as well as in the calendar of the Romanian Orthodox Church,” the Synodal Tomos reads.

The canonization of the Venerable Theophano was decided in February by the Holy Synod of the Romanian Orthodox Church. Her feast day will be October 28, when Romanians from the Bulgarian and Serbian Timok regions commemorate her.