Saints Cyril and Methodius: Examples of Evangelism and Christianisation

By encountering the Slavic people through their own culture and language, they were able to win their love and trust and evangelize them. They did not impose foreign languages or strange customs upon them, but lived with them, mastered their speech and embraced their culture and traditions.
Archimandrite Vassilios Papavassiliou | 24 May 2014 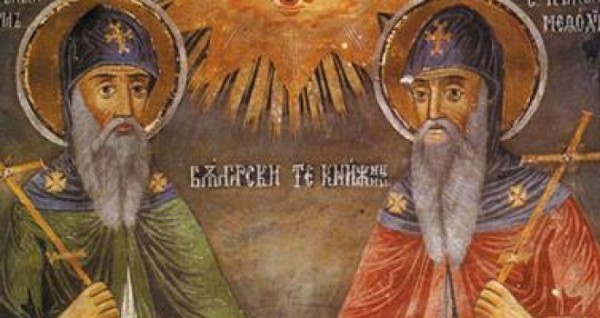 Saints Cyril and Methodius, Apostles to the Slavs (feast day: 24 May according to the old calendar; 11 May according to the revised) are celebrated by Slav Orthodox Christians as national and cultural heroes as well as saints. Much like the Three Great Hierarchs, Saints Basil the Great, John Chrysostom and Gregory the Theologian, whose contribution to Greek literature tends to overshadow what made them such remarkable saints, Cyril and Methodius’ life and sanctity also are frequently overshadowed by their contribution to Slavonic literature through the invention of the Glagolitic and Cyrillic alphabets. Yet they are greatly revered outside the Slav world. So what makes these saints so significant for Orthodox Christians with little or no connection with or interest in the Slavonic language?

At the heart of the universal admiration the Christian Orthodox world has for Cyril and Methodius is their remarkable missionary achievements.

Prince Ratislav of Moravia wrote to the Byzantine Emperor Michael III (842-867), informing him that his people had rejected paganism and that they had embraced Christianity, but they had no one to teach them the faith in their own language. Roman Catholic missionaries had attempted to evangelize the Slavs, but they were unsuccessful, because they all had tried to do so in Latin or Greek. The Slavs needed missionaries who could speak their language. The prince’s request was answered in the persons of Cyril and Methodius. Cyril and Methodius were brothers, born in Thessalonica, Greece early in the ninth century. Both were highly educated, and both became monks; Cyril was also a priest who knew Slavonic.

By encountering the Slavic people through their own culture and language, they were able to win their love and trust and evangelize them. They did not impose foreign languages or strange customs upon them, but lived with them, mastered their speech and embraced their culture and traditions.

But their missionary achievement went beyond this. Although the Slavs had a language, they did not have an alphabet. Cyril and Methodius created one, appropriate for their spoken language, thus enabling the Slavic peoples to read the Scriptures, and providing them with the texts of the Divine Liturgy and other services. Thus, the achievement of Saints Cyril and Methodius went far beyond evangelisation: they Christianised an entire culture. Mission fails when it attempts to replace an existing non-Christian culture with a foreign Christian one. Eastern Orthodox Christians in the West continue to fail in this respect for two reasons. Either we condemn “the West” as incompatible with Orthodoxy, rejecting Western culture as inherently bad; or we set up churches with a culture foreign to the land in which it lives and expect converts to adopt an alien culture.

What Saints Cyril and Methodius continue to teach us is that true mission does not mean replacing one ethnic identity with another or rejecting any culture as incompatible with the Christian Orthodox faith, but accepting it and respecting it in order to fill it with the light of Christ and a living Orthodox Tradition. No one can Christianise a culture if one does not embrace it first. 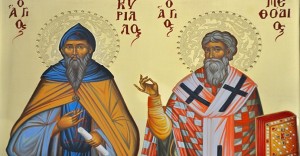 On May 24 the Orthodox Church celebrates the memory of Sts. Cyril and Methodius, the Equal-to-the-Apostles…