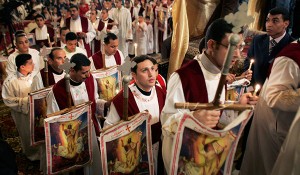 On July 3, Egypt’s President Mohamed Morsi, a leading member of the Muslim Brotherhood (MB), was ousted from power. His detractors came from many segments of Egyptian society, but it is the Coptic Christian community that the MB is scapegoating as the principal actor behind his removal. The Middle East Media Research Institute reports that, in a recent article on the MB website entitled “The Military Republic of Tawadros” (Tawadros being the Coptic Orthodox pope), the MB urges its followers to believe that the Copts “openly and secretly led the process of opposition to the Islamic stream and this stream’s rise to power.”

Attacking the Copts will prove to be as destructive to Egypt as to the religious minority itself.

Following Morsi’s ouster, the MB rejected the invitation of interim president Adly Mansour to be part of the political process, and instead has taken to the streets. It seems intent on regaining some of its lost power through the time-honored tactic of stirring up political unrest and then negotiating reconciliation on its own terms.

Copts came under severe attack right after Morsi’s removal and continue to bear the brunt of violence and threats from the MB and other Islamist groups. As a result, numerous churches have decided it is no longer safe for them to hold regular worship services, Sunday school, and catechesis classes. In Minya governorate, the Holy Mass is now being broadcast on the Internet so the faithful won’t have to risk their lives praying in the churches. Elsewhere in Upper Egypt, liturgies finish by 7 a.m., and then for the rest of the day the churches are closed and put under guard. Death threats forced Pope Tawadros II to leave his seat at St. Mark’s Cathedral in Cairo three weeks ago, and his whereabouts are now kept secret; the threats were issued because he attended a conference called by Egypt’s military to work out the country’s road map and because Copts had joined in the anti-Morsi protests.

The attacks that have terrorized the Copts have been carried out in various parts of the country and by various Islamist groups. On July 4, a building belonging to St. George’s Coptic Catholic Church in Delga, Minya, was attacked by MB supporters who hurled stones, opened fire, and threw Molotov cocktails; the building was burned to the ground. Another church in Delga, the Protestant Reformation church, was also attacked. In the Mediterranean coastal city of Marsa Matrouh, MB supporters tried to destroy the Coptic Orthodox Church of the Virgin Mary. They broke windows and burned the security room before soldiers chased them away. The next day, MB supporters attempted to storm Coptic Orthodox churches in Qena and Luxor. The police and military used tear gas to disperse them, leaving 13 injured.

The Salafists, who are even more extreme than the MB, have capitalized on the chaos to terrorize Copts. On July 5, when the body of a Muslim man was discovered in the village of Nagaa Hassan in Luxor governate, a prominent Coptic opposition member was blamed. He had already been receiving threatening text messages for weeks. He and three other Copts were murdered, and the Coptic community in the village saw two dozen of their homes torched by a mob, forcing some to seek refuge at the local Church of St. John.

Copts have also come under attack from jihadists in Sinai. They are motivated by religious cleansing rather than political reprisal, but it was the political turmoil that gave them an open door. On July 6, a Coptic priest was shot dead as he walked in a public market in el-Arish. The same day a Coptic businessman was kidnapped in Sheikh Zuwayed. Money wasn’t the goal — the victim was found decapitated on July 11, before a ransom deal could be finalized. The local priest said the militants deliberately targeted the man as an active Christian leader, not as a businessman, in order to frighten other Copts. These incidents led many Copts to abandon their homes in fear for their lives and go to safer parts of Egypt, in a way similar to patterns of mass Christian displacements in Iraq and Syria.

The MB, bereft now of its short-lived political power and with its leaders in jail, can’t afford a long battle with the military. But, by inciting violence against the defenseless Copts, it is trying to kill two birds with one stone: rid the country of “infidels” and prove the new regime to be grossly inept. Critically important tourism and foreign investment would further decline, sending the economy over the cliff. The MB knows that the half of the Egyptian people who live on less than $2 a day are a ticking bomb, ready to explode if the regime fails to supply their basic needs. In a word, Egypt would be rendered ungovernable.

In picking scapegoats, though, why the Copts? For starters, their sizable numbers — about 8 to 10 million in a country whose total population is about 90 million — and their history of nonretaliation make them an easy target. They are also a target that various other sectors are guaranteed to rally against: other Islamist groups, who empower themselves through propaganda equating Christianity with the West and portraying the native Copts as foreigners or separatists who seek Western intervention, a new Crusade; government authorities, for whom violence against the religious other can be a nation-building exercise and who need a safety valve and distraction for the impoverished masses; and socially disadvantaged Muslims, who alleviate their own sense of inferiority by persecuting Copts.

Egyptian history is rife with examples of Copts being scapegoated. In modern times, President Sadat placed Pope Shenouda III under house arrest for four years in a bid to gain the support of Islamists. Mubarak’s regime allowed violence against Copts to divert attention from a failing economy. The Military Council that followed Mubarak manipulated the Copts for political gains. After the military drove armored cars into a peaceful Coptic march in Cairo’s Maspero area, killing 27 Christians (photos and wideos of whom were posted on the Internet by witnesses and international media), the generals preposterously assigned blame for the incident to civilian thugs, thus justifying the expansion of martial law.

Many groups — women, artists, small-business owners, liberal students, impoverished youths, leftist activists — had peacefully demonstrated against Morsi. But it is the Copts who expect to pay the price for having dared to engage in peaceful protest. They are bracing for continuing violence from MB supporters and from others who pile on for their own reasons.

The U.S. should use its influence — and not least its billions in military aid — as leverage to press the Egyptian military to protect the Coptic minority. As long as the Copts are denied fundamental human rights, Egypt’s democratization will be illusory.

— Girgis Naiem, an adviser to the Hudson Institute’s Center for Religious Freedom, is a Copt who came recently came to the United States from Egypt and is writing a book about Coptic Christians.