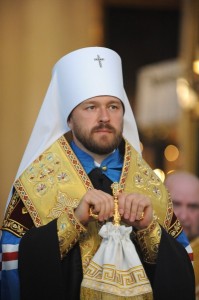 One of the most recognized Russian technical schools, The National Research Nuclear University “Moscow Engineering and Physics Institute” or “MEPhI” is introducing a new department which departs from traditional physics and delves into metaphysics: the Theology Department. Its head is Metropolitan Hilarion of Volokolamsk, who, upon his appointment, immediately traveled overseas in the official capacity.

Izvestia talked with Archpriest Vladimir Shmaliy, vice-rector of the Church Postgraduate Studies, who explained that it was the university which came up with the idea – in fact, it was born back in 2010 after the visit of Patriarch Kirill. MEPhI has previously hosted advanced training courses for professors of Orthodox seminaries, which included lectors on astronomy, physics and chemistry. Now religious scholars will pay back by teaching history of the Church, religious dogma, Orthodox culture and Orthodox worship to students willing to take the courses – these will be strictly voluntary. At first a student won’t be able to major in Theology, only take electives as part of humanitarian courses. However, MEPhI’s branch in Sarov Phisical and Technical Institute graduates scholars since 2001. The daily states that the Russian Orthodox Church is preparing a document “Balance of faith and science”, discussion the complicated relationship of the two in modern times: contrary to clichés like “faith versus knowledge” and “faith denounces evolution and nuclear physics”, the real state of things in not so black and white and the Theology department will help students realize that. Besides, the department does not prohibit critical thinking and students do not have to share beliefs of the teaching staff in order to take courses.