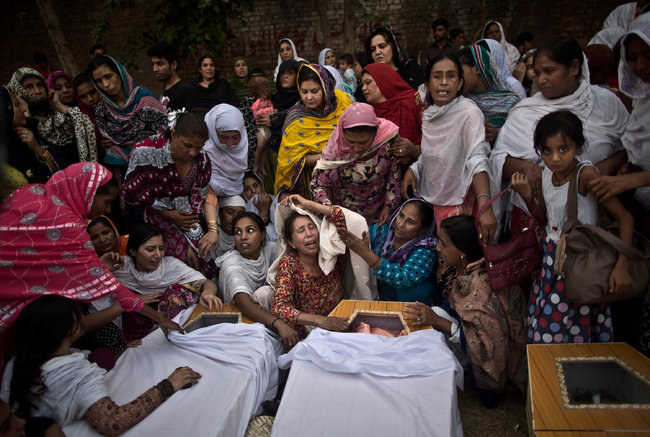 PESHAWAR, Pakistan — A suicide attack on a historic church in northwestern Pakistan killed at least 78 people on Sunday in one of the deadliest attacks on the Christian minority in Pakistan in years.

The attack occurred as worshipers left All Saints Church in the old quarter of the regional capital, Peshawar, after a service on Sunday morning. Up to 600 people had attended and were leaving to receive free food being distributed on the lawn outside when two explosions ripped through the crowd. “As soon as the service finished and the food was being distributed, all of a sudden we heard one explosion, followed by another,” said Azim Ghori, a witness.

Interior Minister Chaudhry Nisar Ali Khan, who arrived in Peshawar on Sunday evening, said that 78 people had been killed, including 34 women and 7 children. “Such an attack on women and children is against humanity,” he said.Akhtar Ali Shah, the home secretary of Khyber Pakhtunkhwa Province, said that more than 100 people had been wounded. Mr. Khan said that 37 of those were children.

The dead included two Muslim police officers who had been posted outside the church. Witnesses reported scenes of mayhem as rescue workers ferried victims from the church, which was scattered with body parts, shrapnel and bloodied clothing.

On Sunday afternoon, the bodies of 45 victims were placed in coffins and moved to the nearby St. John’s Church, the oldest church in the city. The coffins were placed in the church playground as dozens of grieving relatives and mourners gathered. A large contingent of police officers was deployed outside the church, and mourners were allowed to enter the compound after a thorough security check. Ambulances were allowed to enter the compound one by one as dead bodies were then placed in vehicles to take them to the morgue.

Shafqat Malik, a senior official of the bomb disposal squad, said in an interview that evidence collected from the church confirmed that two suicide bombers had carried out the attack. “Each bomber carried six kilograms of explosives,” he said.

The attack coincided with a broader wave of attacks on religious minorities, including Shiite Muslims this year.

In March, a Muslim mob swarmed through a Christian neighborhood in the eastern city of Lahore, burning two churches and more than 100 houses. Christians also frequently find themselves accused of blasphemy under Pakistan’s strict blasphemy laws.

The attacks are mostly orchestrated by Sunni extremist militant groups, although some have also been claimed by the Pakistani Taliban.

All Saints Church is one of the oldest in Peshawar and was built during the British colonial era. It is at Kohati Gate in the city’s old quarter, where numerous militant attacks have occurred in recent years, mostly targeting Muslims.

Prime Minister Nawaz Sharif has been trying to initiate peace talks with the Pakistani Taliban, aimed at ending a decade of violence. An all-parties political conference held this month gave the government approval to start negotiations with the insurgents.

But that offer was publicly rejected by the Taliban, which later claimed responsibility for the killing of a senior army general in Upper Dir, near the Afghan border, last week.

Immediately after Sunday’s bombing, questions were again raised about the government’s plans to hold peace talks.

In a statement, Mr. Sharif said, “The terrorists have no religion, and targeting innocent people is against the teachings of Islam and all religions.” The Pakistan Ulema Council, the largest clerical body, also condemned the blast, saying that the council was “standing with our Christian brothers in this tragedy.” The opposition leader Imran Khan, who has advocated initiating peace talks with the militants, expressed solidarity with the Christian community but also repeated his call to tackle terrorism in the country.

Mr. Khan said he believed that the bombings were an attempt to sabotage the peace talks. “A conspiracy is being hatched to drag the country back to the 10-year-old morass,” he said, referring to the time when former President Pervez Musharraf allied himself with the United States in the effort against militancy and extremism.

But there were contrary voices, as well. Raja Nasir Abbas, a Shiite leader who is the secretary general of the party Majlis-e-Wahdat-e-Muslimeen, demanded a “ruthless operation against the Taliban” and declared that the “weak policies” of the government had “emboldened the terrorists.”

Hundreds of Christians and activists from civil society groups protested in Lahore after the attack. They blocked roads as they condemned the violence.“We have not been protected,” said Pitras Masih, a young laborer who had a wooden cross in his hand and a chain with a cross around his neck. “We want justice.” Others held aloft placards demanding justice. “There is a uniform behind this terrorism,” one placard said.