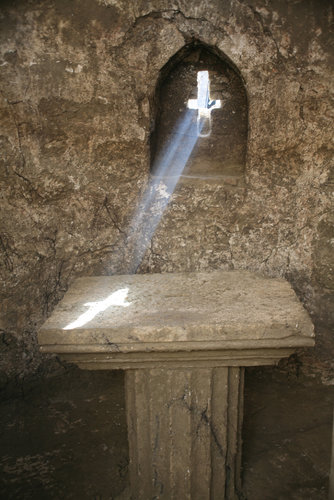 DEMRE, Turkey — In the fourth century A.D., a bishop named Nicholas transformed the city of Myra, on the Mediterranean coast of what is now Turkey, into a Christian capital.

Nicholas was later canonized, becoming the St. Nicholas of Christmas fame. Myra had a much unhappier fate.

After some 800 years as an important pilgrimage site in the Byzantine Empire it vanished — buried under 18 feet of mud from the rampaging Myros River. All that remained was the Church of St. Nicholas, parts of a Roman amphitheater and tombs cut into the rocky hills.

Archaeologists first detected the ancient city in 2009 using ground-penetrating radar that revealed anomalies whose shape and size suggested walls and buildings. Over the next two years they excavated a small, stunning 13th-century chapel sealed in an uncanny state of preservation. Carved out of one wall is a cross that, when sunlit, beams its shape onto the altar. Inside is a vibrant fresco that is highly unusual for Turkey.

The chapel’s structural integrity suggests that Myra may be largely intact underground. “This means we can find the original city, like Pompeii,” said Nevzat Cevik, an archaeologist at Akdeniz University who is director of the excavations at Myra, beneath the modern town of Demre.

Mark Jackson, a Byzantine archaeologist at Newcastle University in England, who was not involved in the research, called the site “fantastic,” and added,“This level of preservation under such deep layers of mud suggests an extremely well-preserved archive of information.”

Occupied since at least the fourth century B.C., Myra was one of the most powerful cities in Lycia, with a native culture that had roots in the Bronze Age. It was invaded by Persians, Hellenized by Greeks, and eventually controlled by Romans.

Until the chapel was unearthed, the sole remnant of Myra’s Byzantine era was the Church of St. Nicholas. (The bishop, also known as Nicholas the Wondermaker, was a native Lycian of Greek descent.) First built in the fifth century A.D. and reconstructed repeatedly, it was believed to house his remains and drew pilgrims from across the Mediterranean. Today, Cyrillic signs outside souvenir shops cater to the Russian Orthodox faithful.

But Myra attracted invaders, too. Arabs attacked in the seventh and ninth centuries. In the 11th, Seljuk Turks seized the city, and the bones thought to be those of Nicholas were stolen away to Bari, in southern Italy, by merchants who claimed to have been sent by the pope.

By the 13th century, Myra was largely abandoned. Yet someone built the small chapel using stones recycled from buildings and tombs.

Decades later, several seasons of heavy rain appear to have sealed Myra’s fate. The chapel provides evidence of Myra’s swift entombment. If the sediment had built up gradually, the upper portions should show more damage; instead, except for the roof’s dome, at the surface, its preservation is consistent from bottom to top.

“It seems incredible,” said Engin Akyurek, a Byzantine archaeologist with Istanbul University who is excavating the site. He and his team dug down 18 feet to the base of chapel, where they discovered a few artifacts from the early 14th century. (At the time, Turks were gaining control of Anatolia, and after the fall of Constantinople in 1453 the Ottomans ruled for nearly five centuries.)

In the layers of mud between the 14th-century ground level and the late-Ottoman level — which is just shy of the modern surface — they discovered nothing at all.

Ceramics unearthed at the chapel and at St. Nicholas Church indicate that Myra remained unoccupied until the 18th century. And while a sunken city “may sound romantic,” said Dr. Jackson, the British scholar, “this mud promises to have preserved a treasure trove of information on the city during an important period of change.”

How classical cities transformed into Byzantine cities during the Christian era, especially between 650 and 1300, is a subject of much scholarly debate.

“Each city was different,” Dr. Jackson said, “and so we need high-quality, well-excavated evidence in order to contribute to the debate about the nature of urban change in this period.”

The fresco in the excavated chapel is especially striking. Six feet tall, it depicts the deesis (“prayer” or “supplication” in Greek). This is a common theme in Byzantine and Eastern Orthodox iconography, but the Myra fresco is different.

Where typically these depictions show Christ Pantocrator (Christ the Almighty) enthroned, holding a book and flanked by his mother, Mary, and John the Baptist, whose empty hands are held palms up in supplication, at Myra both John and Mary hold scrolls with Greek text.

John’s scroll quotes from John 1:29: “Behold the Lamb of God, who takes away the sin of the world.” Mary’s is a dialogue from a prayer for the Virgin Mary in which she intercedes on behalf of humanity, asking Jesus to forgive their sins. Dr. Akyurek said this scroll-in-hand version had been seen in Cyprus and Egypt, but never in Turkey.

The chapel is part of a larger dig that includes the Roman amphitheater — largely reconstructed in the second century after an earthquake leveled much of Lycia — and Andriake, Myra’s harbor, about three miles south. Long a major Mediterranean port, Andriake was where St. Paul changed ships on his way to Antioch (now Antakya). Finds there include a workshop that produced royal purple and blue dye from murex snails and a fifth-century synagogue, the first archaeological evidence of Jewish life in Christian Lycia.

Much of Myra is under modern buildings in Demre, so archaeologists are unsure where they will dig next. They are buying property from local residents to prevent illegal excavations, though judging from the paucity of artifacts found so far, looters might be disappointed: the last residents of Myra seem to have looked at the rising floodwaters and packed their bags before they left.