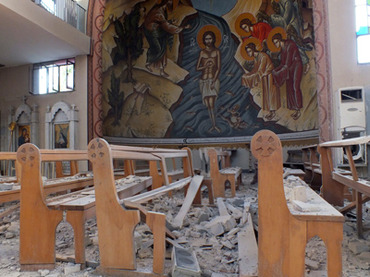 The ongoing conflict in Syria is becoming increasingly sectarian amid reports that rebel fighters have attacked a housing compound for employees of a power company, killing 16 civilians, mostly Alawites and Christians.

“Armed men stormed the Jandar residential compound, firing indiscriminately and killing 16 Syrians, among them six Christians, six Alawites – including the compound director – and four Sunnis,” said the director of the Syrian Observatory for Human Rights, a London-based NGO.

Abdel Rahman said the gunmen targeted only the Syrian employees of the Jandar power plant. The other employees were Japanese and Iranians, who live with their families in the compound in Jandar village. “The village and its surrounding areas are Sunni,” he added.

Syria is a predominantly Sunni country, but it is also home to Christians and other Muslim denominations, among them the Alawite sect, an offshoot of Shia Islam. Syria’s President Bashar Assad and the country’s ruling elite belong to the Alawite minority.

The latest attacks against minorities come after Bassam Mohieddin, an Alawite film director, was killed near his home in the outskirts of Damascus on Sunday.

Also on Tuesday, US Secretary of State Hillary Clinton has warned against Syria descending into a sectarian war. “We have to set very clear expectations about avoiding sectarian warfare,” she said during her trip to South Africa, Reuters reports.

“Those who are attempting to exploit the situation by sending in proxies or terrorist fighters must realize that will not be tolerated, first and foremost, by the Syrian people,” she added.

The collapse of the Assad regime could lead to the repression of minority groups, former Russian prime minster and Middle East expert Evgeny Primakov has warned in an interview with the Rossiyskaya Gazeta newspaper.

“Should the armed opposition manage to oust Assad, it would try to impose a Sunni regime, which would immediately lead to the persecution of Alawites, who comprise a significant part of the population,” he said adding that everyone who does not share the opposition’s religious views would face repression.

Primakov also explained that Al-Qaeda is supporting the Syrian rebels because it is a Sunni organization.

The ongoing violence in Syria has reportedly claimed some 21,000 lives since the uprising against the Bashar Assad regime started in March 2011.