Seeking Transparency: The Ministry of Translation

“Our work is not servile drudgery but diakonia,” writes the Athonite abbot Fr. Aimilianos. This view of work, encompassing the most dreary tasks – not just taking care of the church or entertaining guests but keeping the accounts, running errands to the town or doing laundry – is of course not exclusively monastic. All of us are invited to see our day-to-day occupations, paid or unpaid, in the same light: as ministries of service that we perform as members of Christ’s body. As diakonia – the root is the same as in the word deacon, one who goes back and forth serving.

Any task or way of life which is a ministry of service works in two directions. It does something for others, to be sure; but it also provides a way in which He who is among us as one who serves teaches us how to be like Him.

When I think of the translation work on which I spend a fair amount of my time, so many of the images which spring to mind are theological. True, the texts I work on are almost exclusively theological, which makes it easier to see the work in that light: but I believe much the same applies to any text which the translator considers worth the effort.

For a start, translation work is an exercise in kenosis, self-emptying. It means using your skill in language in a way which is the opposite of self-expression. In order to perform your work, you have to “decrease” to let the author “increase.”

This does not mean in translating (any more than it does in ascetic life) that you become colorless. Now here is an interesting quirk of language: in their literal sense, “colorless” and “transparent” may mean much the same thing. In their metaphorical sense, however, they could hardly be more different. The translator aims to be transparent, in much the same way as the iconographer or church reader is “transparent.” Each brings into play all his skill, natural talent and knowledge of technique, in order to channel a certain message rather than obscuring it. In each case, unique personal talents are exercised to the utmost in transcending individuality so that on becomes a faithful messenger.

For that matter, translation is best done not as an individual activity at all, but as a shared task. This does not mean translation by committee. It does mean that a fresh pair of eyes and a fresh mind are invaluable, both to help with various points in the course of the work and to look over the finished draft — not least because even the most experienced translator can occasionally make elementary howlers. You misread a work or mistake an allusion, and the damage is done – until someone spots it. You may have been eating, sleeping, and breathing this text for months – but you can never possess it as a purely individual achievement. 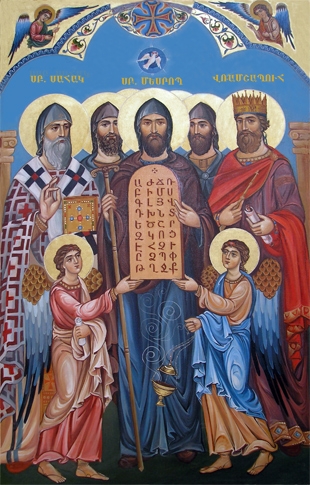 Armenian icon of the Holy Translators

There are times when translation can feel like unremitting ascetic labor. Last year, I had the privilege of working on a Life of a twentieth-century Athonite hermit who played a key role in the contemporary monastic revival on the Holy Mountain. Spiritual feats and insights worthy of the Desert Fathers are set out in the tortuous and frequently turgid Greek of an author whose formal education was probably minimal. Yet the style mirrors the life: nothing about it makes the approach easy or comfortable. It comes to the reader “having no form nor comeliness”; and to alter that would be to distort everything. Yet the translator has to endow it with sufficient form and comeliness that the English-speaking reader will continue beyond the first paragraph. So what to do? You wrestle with a sentence, sometimes for hours, to produce something at least grammatical and coherent – and end up with the sort of English that you would never want to, but which may by God’s grace be the rough earthen vessel in which the reader finds a treasure of spiritual life.

There are moments in life when you feel brimming with energy and want to leap and stretch and exult in all your bodily capacities. Sometimes, the mental exertion of translating can produce a similar exhilaration. For language in itself is beautiful, in its subtlety and intricacy. The simplest sentence, with its balance of sound and rhythm, its shades of meaning given by a particular choice and order of words, can be an exquisite masterpiece in which the whole conveys more than the sum of the parts. Language is an awe-inspiring and wonderful gift unique to man – hence the Church’s insistence that the human voice alone is the fitting instrument with which to praise God in church. You wonder at the delicacy and power of this material you are privileged to work with: two language, two total conceptual frameworks within which whole peoples, whole cultures experience the world. To look at the artistry of a sentence, bearing the unique flavor of its author’s personality – however elegantly or clumsily he writes – and to realize that as human beings we have the capacity to comprehend all the nuances of what is being said, and then to recast it in the radically different medium of another language – this is to exclaim with the Psalmist, “I will praise Thee, O God, for I am fearfully and wonderfully made.”