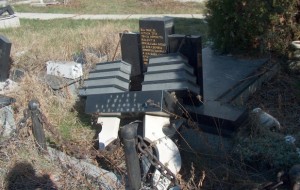 BELGRADE — A total of 56 gravestones have been destroyed in the cemetery in the central Kosovo town of Kosovo Polje over the past few days.

This was announced by the Serbian government’s Office for Kosovo and Metohija.

““We are seeking from the international community to immediately find and punish the perpetrators of this act of vandalism and also the vandals who broke into the chapel of the church in the village of Bresje, Kosovo Polje, at Christmas Day,” a statement said.

The office also condemned “an attempt to conceal the truth by the so-called Kosovo authorities.”

“In the past few days, a total of 56 Serb gravestones were destroyed at the central cemetery in Kosovo Polje, rather than in the village of Makarabe as the Kosovo Police Service (KPS) states in a report,” says the release.

The Kosovo office added in its statement that it wished to draw the attention of both UNMIK and the OSCE to the fact that the tombstones in Makarabe had been destroyed long ago, stressing that the KPS had been “grossly abusing that fact”.