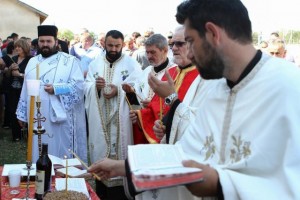 BELGRADE — Tuesday marks 14 years since 14 Serb farmers were ambushed and murdered while working in their fields in the village of Staro Gracko in Kosovo.

SPC Bishop of Raška-Prizren Teodosije led a religious service in their memory, followed by a gathering in front of a memorial plaque in the center of the village.

A 17-year-old was the youngest of the victims killed on July 23, 1999 in this village south of the Ibar River – one of the gravest crimes targetting Serbs since the deployment of international missions in Kosovo after the war.

In 2007, UNMIK police arrested an ethnic Albanian, Malzum Bytyqi, on suspicion of involvement in the murders, but he was freed after two months for a lack of evidence.

Aleksandar Vulin was in Leposavić in northern Kosovo on Monday, when he asked what authority the international community had when it could not “answer” about any of the crimes committed against Serbs in Kosovo and Metohija.

EU mission representative Irine Gudeljevic told Beta that the Special Prosecution of Kosovo “recently received new information about the murders,” and that an EULEX prosecutor was “considering them.”