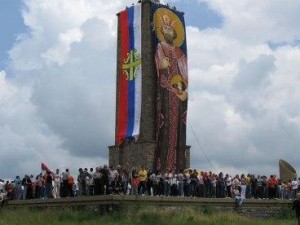 BELGRADE — St. Vitus Day (Vidovdan), one of the most significant dates and holidays for Serbia, is being marked across the country on Friday.

Central celebrations are taking place in Kruševac, where the government will hold a special session, and in Kosovo.

In Kruševac, a central Serbia town that was the capital of the medieval Serbian state during the reign of Prince Lazar, the 624th anniversary of the Battle of Kosovo was marked with a ceremony led by President Tomislav Nikolić.

Serbia commemorates June 28 to honor the soldiers of the medieval Serbian kingdom who in 1389 in Kosovo gave their lives defending the country from the invading Ottoman Turks.

At noon Nikolić led a commemorative ceremony of laying wreaths and paying state and military tributes at the Monument to Kosovo Heroes.

The Serbian government will hold a special session at the town hall in the afternoon, which will be open to the media.

The Battle of Kosovo, fought in Kosovo Polje near Priština, was a turning point in the national history after a period of progress under the Nemanjić dynasty. Serbia lost the battle to the invading Turks, who later gradually occupied the country.

But the sacrifice of the defenders “has come to symbolize freedom, resistance to foreign aggressors, patriotism and national spirit, knighthood and heroism,” Tanjug is reporting.

In Kosovo, the day will be marked with liturgies in Serbian Orthodox monasteries of Gračanica and Visoki Dečani monasteries and a memorial service for Serbian soldiers who died in the Battle of Kosovo at the Gazimestan memorial.

The Kosovo police, KPS, said that by 08:00 CET some 400 people have traveled to Gazimestan from central Serbia and northern Kosovo this morning, and unlike last year, there have been no reports of incidents so far.