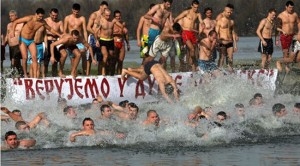 BELGRADE – The Serbian Orthodox Church (SPC) celebrated Epiphany, a holiday that commemorates the baptism of Jesus Christ, on Sunday by holding liturgies and swimming competitions in which participants race to recover the Holy Cross from rivers and lakes.

SPC Patriarch Irinej held a liturgy at the Church of St Nicholas in Zemun, followed by the traditional swim for the Holy Cross in the Danube.

The number of competitors in Zemun was record this year, 367, with the youngest swimmer aged 10 and the oldest 83. The first one to reach the cross was Dejan Dimitrijevic, a water polo player from Belgrade.

The race for the cross was held at Ada Ciganlija and three other locations in Belgrade. The contestants included civilian citizens, members of the Armed Forces, the Gendarmerie and Svibor, an organization that fosters Serbian medieval tradition.

Similar races were held at 70 other locations in Serbia, including Serbia’s southern province of Kosovo, as well as in Republika Srpska, Montenegro and among Serbs living outside of Serbia.

The swim for the Holy Cross was banned in the former Yugoslavia during communism. The event was reintroduced in Serbia in 1997.

The holiday is also observed by the Russian Orthodox Church, Patriarchate of Jerusalem and Mount Athos.