‘Serbia has many things to be proud of, it will become more obvious next year’ – Tomislav Nikolic 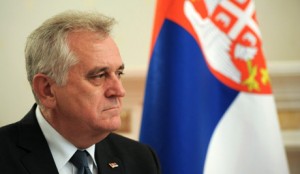 Serbia aims at developing relations with the entire world, including with Russia. This idea was the leitmotif of President Tomislav Nikolic’s visit to Moscow. The President’s day was written down minutely, but nevertheless, he has found time to answer the questions of the Voice of Russia special correspondent Vera Zherdeva.

Mr. President, has Serbia’s position in the international arena changed since your inauguration?

From the political point of view, Serbia has reached serious progress this year: it opened the doors that had been closed long ago, or those, which it had never opened; it revived old friendships. Many relationships were raised to a higher level. Serbia has no enemies any more, nobody speaks about Serbia in a negative way, and Serbia is no longer a pariah in the international community. So, I’m satisfied with the way we have presented Serbia to the world.

Economically, we are a part of the world community. The economic crisis was provoked by great powers, and they will overcome it somehow; we just have to endure the consequences of what we could not have influence on. Therefore, Serbia is greatly in debt. We are introducing a new economic philosophy now: not to take loans any more, but to build strategic partnerships, to revive the industry in a completely different way. You see, we now have more intensive relations with Russia, China, UAE, and Africa. Unfortunately, Europe is the only region that is currently lagging behind in economic development.

What events of cultural life would you distinguish?

As far as culture is concerned, we have just hosted a unique event: we celebrated the 1700th anniversary of the Edict of Milan signing. The final celebrations took place in October, and they were attended by all the Orthodox patriarchs, and among them – Patriarch Kirill. I believe, it was one of the most representative meetings in the modern history of Orthodoxy. I can say that the patriarchs (and some of them had differences in relations) were happy to meet each other.

Certainly, we should expect attacks on the part of those, who believe that Serbia is to be blamed for the fact that this war began. But we will turn to Russia, Greece, France, England, the allies in the First World War with a suggestion that we should celebrate this date. The fact that those, who started this war and lost it, participate in such events is understandable. But it is absolutely unacceptable for Serbia not to participate, because together with Russia it has suffered huge losses in all the World Wars.

We constantly hear the thesis that we live badly because we deserve this, we or our ancestors. You know that Russian and Serbian people are very much alike: they are two completely open people, with open houses and light burning for each guest. Unfortunately, Serbia has not got enough funds to present its culture, its history, its tradition and its potential on the high level in the world. But we are doing our best. We’ve celebrated 70 years since Nikola Tesla’s death in New York. A monument to him was erected there. The whole world is indebted to this scientist for his significant contribution to science.

Serbia has many things to be proud of, and it will become more obvious next year.