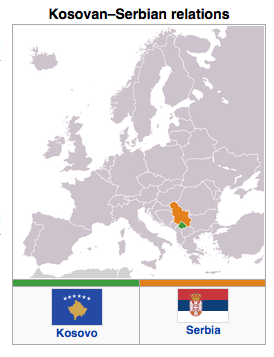 Scenting a softening of Serbia’s claim to the former province, the Serbian Orthodox Christian Church has accused the government of being an accomplice to international plans to ‘cut its jugular and take out Serbia’s heart’.

In a strongly worded letter, the Holy Synod of the Serbian Orthodox Church has demanded that Serbia’s authorities stop taking part it what it called “the country’s suicide” over Kosovo.

“It is perfectly clear to every reasonable man that the Western powers, after the NATO bombing war [in 1999] are step-by-step creating the state of Kosovo for Kosovo Albanians while getting Serbia to act as their accomplice… cutting her jugular and taking its heart from its bosom, her holy land of Kosovo and Metohija,” the letter said.

The letter was sent on Thursday to the Serbian President, Tomislav Nikolic, the Prime Minister, Ivica Dacic, the First Deputy Prime Minister, Aleksandar Vucic, and to opposition leaders.

It remains unclear who sent the letter on behalf of the Church as, after it was released on Thursday, some bishops denied that anyone in the Church had sent it while other bishops confirmed it.

The letter further criticizes the government’s Kosovo policy and the deals that Belgrade has reached with Pristina during EU-mediated talks, which started in March 2011, three years after Kosovo declared independence.

“We expect the government and parliament to reconsider all agreements of the previous government about [border] ‘crossings’ that have not been approved by parliament instead of accepting the [EU-brokered] ‘integrated border management’ agreement,” the document says.

The letter comes a day after Dacic and his Kosovo counterpart, Hashim Thaci, agreed that implementation of an earlier border agreement will start on December 10 on two border crossings.

Under the terms of the IBM agreement, Kosovo and Serbian customs and police officers will stand under one roof once the agreement is put into operation.

The Church said the government should also seek guarantees from the international community for the return of thousands of expelled citizens from Kosovo, and restoration to them of their homes and churches, and should pass a law on restitution of the state and church property in Kosovo before any other talks take place.

According to the document, the state should also demand removal of the US military base, Camp Bondsteel, from Kosovo, and stop “the cowboy-style illegal occupation of Serbian lands and mineral resources in Kosovo”.

The document also calls for investigations before international courts into allegations that top Kosovo officials were part of an organised crime network that trafficked in organs.

President Nikolic met with Patriarch Irinej, head of the Church, three times since he became president in May. The purpose of the visits was to seek the Church’s support for government policy on Kosovo.

Most viewed articles
Unbalanced Fears123
When We Do the Wrong Things Habitually117
Metropolitan Onuphry: “Do Not Be afraid of Demons, They Have No Power”97
The Tattoo on Our Being77
Delegations of Local Orthodox Churches Arrive in Kiev for the Celebration of Baptism of Rus68
350 Thousand Believers Take Part in Cross Procession in Kiev62
St John of Shanghai Summer Camp Concludes in Switzerland35
Most popular authors
Pravmir.com team262
Fr. James Guirguis123
Abbot Tryphon117
Fr. Andreas Agathokleous77