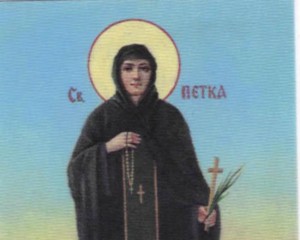 BELGRADE – Serbian Orthodox Church will celebrate tomorrow Parascheva of Tirnovo, known as Petka Trnova. Sveta Petka was born in Rome. She came from a Christian family and lived in the second century after Christ.

After her parents died, she gave her estate to the poor and became a monk. As a monk, she preached forbidden Christian faith and she was accused for it to emperor Antoninus Pius. Healing the emperor, who was baptised, she continued her missionary work in other areas.

She was imprisoned, tortured immensely because of preaching Christian faith and eventually beheaded on the orders of Prince Tarsius, around year 140 AC. Her remains were later transported to Constantinople.

The holiday of Sveta Petka is always celebrated on August 8 in the Gregorian or July 26 in the Julian calendar. This day is very respected in Serbian people. With this holiday summer “cycle of women holidays” finishes. This is period when all hard work in the field and house is avoided.

Many confuse St. Petka Trnova, who was Roman and is celebrated in August, with St. Petka, Greek celebrated in October, not knowing that there are more saints with the same name in the calendar.