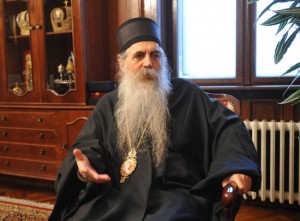 BELGRADE – The Serbian Orthodox Church (SPC) Holy Assembly of Bishops discussed again on Thursday the situation and the SPC mission in the areas with specific problems, Kosovo-Metohija in particular, said the spokesman for the SPC, Bishop of Backa Irinej.

At a conference in the Patriarchate of Belgrade, he said that the Holy Assembly of Bishops also held a debate on the Church’s functioning in the surrounding states, and the state of the Church’s missions on other continents such as North and South America and Australia.

“At today’s meeting, the bishops considered reports and held a debate on various aspects of the Church’s mission and life, and they delivered canonical decisions relating to the SPC institutions, bodies,” Bishop of Backa Irinej said.

He announced that that the Holy Assembly of Bishops also considered in more detail the celebrations of 1700th anniversary of the Edict of Milan in Nis on June 3. He also voiced hope that the celebrations will be worthy of the date and Church.

The SPC Holy Assembly of Bishops opened its session on May 21 with a liturgy in the St. Michael’s Cathedral in Belgrade, and will be in session for two weeks at least.