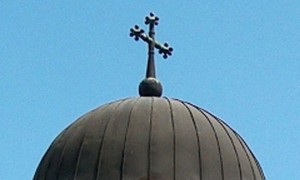 Unidentified individuals desecrated the Serbian Orthodox church of Saint Sava in the Sarajevo neighbourhood of Blazuj, when they broke six windows panes and wrote improper messages.

According to him, the local police have been notified about the incident and they carried out a preliminary investigation.

The church in Blazuj was targeted by an attack a month ago when vandals tried to set the entrance on fire in the night between April 21 and 22, the Radio Televizija Republike Srpske reported.