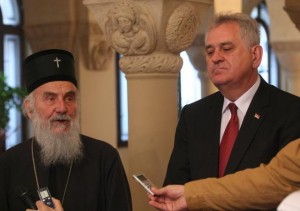 This is necessary “in the search for a solution to the Kosovo and Metohija issue as the most important national matter.”

“We wish to resolve the Kosovo and Metohija issue in a way that does not jeopardise the Constitution or Serbia’s sovereignty, nor calls into question the lives and security of Kosovo-Metohija citizens, especially the local Serb population,” the president said in a joint address to reporters after the meeting with the SPC patriarch in the Belgrade Patriarchate.

The patriarch also voiced the need for unity and warned that splits are the most difficult problem in the search for a solution to the Kosovo and Metohija issue, as well as stands voiced without grounds or reasons and excuses which can prove detrimental and cannot be of any use to Serbia.

He noted that they also wish to avoid any discrepancies in the statements since there are none in their stands, and expressed the hope that Serbia would come out of this stronger and preserve its dignity.

The president said that certain individuals should take into consideration whether or not they are causing damage by their statements to Serbia’s relations as a whole.

According to him, everyone can and should say what they think and voice their ideas, but nobody is allowed to abuse their position in any way.

He noted that the Belgrade Patriarchate has always been a home where one can receive advice, appeasement and comfort, and added that he is grateful to the patriarch for their exchange of stands which always yields positive results for Serbia.

“The problem is rather comprehensive and it is very important for us to be united when it comes to the Kosovo and Metohija issue,” Irinej said.

“We know that the situation is difficult but we must not lose common sense and give in to emotions because reason needs to prevail so that we could see which path and solution we should opt for,” the patriarch said.

He remarked that certain statements were made over the past few days whose nature is purely individual and personal.

“We will discuss this within our bodies as well, as it is only natural for the Church to be united in everything, as the Church has always been the concept of unity,” the patriarch said.

Most viewed articles
Last Man Standing175
Metropolitan Hilarion Speaks on Whether It Is Possible for ROC to Reunite with Old-Believers133
Saint Macrina the Younger as a Model for our Lives112
Christ Forgives and Heals98
Metropolitan Onuphry: People Get Strength for Life and Salvation in the Church54
Turning Trials Into Hope52
Businessman Buys a 19th Century Church and Returns It to the Faithful48
The Temple of Woke: Are Universities Basically New ‘Religious’ Training Centers?1
Most popular authors
Pravmir.com team235
Archpriest Geoffrey Korz175
Protopresbyter Fr. George Papavarnavas112
Fr. Theodore Stylianopoulos98
Fr. James Guirguis52
Eric Hyde1