Serbs say Kosovo police tortured them while in detention 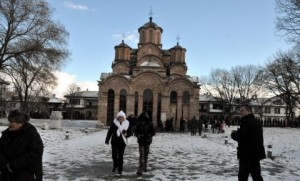 PRIŠTINA — The EU mission in Kosovo, EULEX, has been sent complaints accusing members of the Kosovo police, KPS, of committing torture.

A group of Serbs detained on Christmas Day in the Serb enclave of Gračanica, transferred to Priština, and then released a day later with misdemeanor charges pressed against them, was subjected to beatings and insulting behavior while in custody in Priština, they revealed on Wednesday.

Darko Vlasaj, one of the group of ten Serbs arrested on Monday, today accused members of the ROSU unit of the KPS of brutally beating him in the court building in Priština.

The 30-year-old resident of Leposavić in the north of the province is now being treated in the urology ward of the Kosovska Mitrovica hospital.

“What happened to me, and what we have gone through in the court in Priština is horrible. They were beating us for no reason – what would have happened if we actually did something wrong?,” Vlasaj said as he spoke with reporters ahead of his surgery.

The victim sustained serious injuries to his perineum.

“They beat me when I was in the toilet, saying they were doing it so that I would never be able to have children. They handcuffed me, spread my legs, and mercilessly hit me. There were two of them. They forced me to splash water on my face to refresh myself and warned me that I must not tell anyone I was beaten,” Vlasaj described his ordeal, and added:

“When I reached my friends I managed to tell them not to think about going to the toilet because they would receive the same treatment there as I had.”

Urology Ward chief Dejan Denović told journalists that the patient’s injuries were inflicted when he was kicked, and that his urethra was injured.

“The patient had trouble urinating, and there was blood in his urine. For that reason he had to be hospitalized, because these are serious injuries which have long-term consequences,” the doctor stated.

It was reported late on Wednesday that Vlasaj had in the meantime been transported to Belgrade due to the severity of the injuries to his abdomen.

According to Radio KiM, another Serb also received medical help in the hospital, but was later released at his own request.

Others from the group also said they were on several occasions beaten while in the detention unit in Priština, and that they were also subjected to verbal abuse. This prompted them to file a complaint with EULEX, accusing the Kosovo police of torture and inhuman behavior toward detainees.

The group of Serbs arrested on Christmas was interrogated for 16 hours by an investigative judge before being charged for minor offenses and released late on Tuesday.

A court in the town dealing with misdemeanor cases is expected to pass a verdict against them later in the day, lawyer Dejan Vasić confirmed for the radio station.

The Kosovo police arrested the ten Serbs who were in Gračanica to attend Christmas liturgy together with Office for Kosovo Director Aleksandar Vulin.

The northern Kosovo Serbs, who were released after two days in custody following the arrest in Gračanica on Orthodox Christmas Day, said on Wednesday that members of the Kosovo Police Service (KPS) beat them during the arrest, in custody, even during the questioning in the court in Priština.

One of the detainees, Branko Milojević, said at a press conference in Leposavić that all were battered in the police and court buildings, even in the police vehicle.

Candle lighting and tour of the monastery turned into a catastrophe for us, Milojevic said, qualifying the detainees’ experience as indescribable.

“We ran the gauntlet in the police. We were tied and everyone beat us. Then, the three of them put a belt around by neck, trying to strangle me. Then, one asked me where I am from, and when I replied, he asked whether that is in the Republic of Kosovo. Since I did not want to answer, they continued to beat me, although I was tied,” MilojeMilojevićvic said.

The police battered him with baton, flashlight torch and rifle butt.

“They even beat me in the court while I was sitting, and required that all of us lower our heads since we are a paramilitary formation and Chetniks,” he added.

The young man with the most serious injuries said that he was beaten up in the toilet of the court building while the questioning was underway, adding that all 10 young men were exposed to violence, some less and some more.

“Last night, after the release we were forced out to the streets in Priština. We were in fear, we were afraid for our lives, but we stopped two cabs, and managed to reach Gračanica,” Milojevic said.

After the Christmas liturgy on January 7, the Kosovo police arrested 10 young men under pretext that they endangered general security and wore symbols of civil protection.

The charges were denied by Director of the Serbian government’s Office for Kosovo and Metohija Aleksandar Vulin, stressing that their arrest is brutal violence that had no reason behind.

The Serbian government immediately called for the release of all arrested persons. However, they spent 48 hours in custody and were released after the questioning that ended on Tuesday evening. They are now released pending trial, and two of them were admitted to a hospital in north Kosovska Mitrovica.

As Tanjug learned from lawyer Dejan Vasić, they are now charged with violation of public peace and order and disrespect of the police.

Krstimir Pantić, deputy head of the Serbian government’s Office for Kosovo and Metohija, urged Wednesday punishment for the persons responsible for battering of Serbs, whose freedom was curtailed in Gracanica, central Kosovo, on Orthodox Christmas, January 7.

Pantić called on the KFOR commander, the head of the EULEX Mission, and the UNMIK director in Pristina to pay a visit and see for themselves that one of 10 Serbs arrested in Gračanica on Christmas was admitted to the Kosovska Mitrovica hospital in a serious condition.

In a letter to the representatives of the international community, Pantić, who also serves as mayor of Kosovska Mitrovica, said that the persons responsible of this brutal beating of young Serbs, which was not provoked by anything, should be punished and suspended from work.

“In case of a lack of your action, we will consider that you have taken the side of injustice, meaning that you directly support excessive use of force and brutality by members of the Kosovo Police Service (KPS) aimed at intimidation and expulsion of the remaining Serb population in Kosovo-Metohija,” the letter reads.

Serbs advised to complain to KPS

EULEX officials met on Wednesday with the Serbs who were arrested after the Christmas liturgy in the Gračanica monastery, EULEX spokesman Blerim Krasniqi told Tanjug.

In a written statement regarding the Serbs’ claims that they were beaten in the court building in Priština, Krasniqi said that EULEX officials talked with the Serbs that had been arrested , “and explained to them the complaints procedure before the Kosovo Police Inspectorate”.

“If there is any complaint, with the consent of these individuals, the information obtained in this way will be shared with the relevant officials,” Krasniqi said.