Sermon on the Dormition

Mary was completely human like us. But the Mother of God struggled hard to protect her purity. The Mother of God promised herself to God alone, and vowed not to marry. This was an exceptional vow for a Jewish girl of that time. The Jewish nation saw the bearing of children as a blessing, since then the blood-line of the parents continues toward the establishment of the kingdom of God .
admin | 25 August 2006 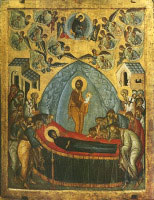 In the name of the Father, and the Son, and the Holy Spirit!

Dear brothers and sisters in Christ,

Today we celebrate the falling asleep of Mary, the Mother of God. We call death a falling asleep for the faithful, since their souls still live and reside in the bosom of Abraham until they are joined again with their bodies at the General Resurrection. The only real death is separation from God in sin.

We know very little about the life of the Mother of God. Scripture mentions Mary in connection with the birth of Christ, and in a passing way with the apostles after Christ’s crucifixion and resurrection. While on the Cross, Christ committed his mother to the care of the apostle John. We learn from tradition that Mary lived with John in Jerusalem near the tomb of the Lord, and the church was very comforted by the graceful presence of Mary. She shared with the apostle Luke the account of her miraculous birth-giving, which was the source he used to write his gospel. The earliest accounts of the passing away of Mary are provided by Melito of Sardis and Cyril of Jerusalem. Saint John of Damascus later incorporated their narrations into his homilies and services on the Dormition of Mary.

Mary died as all people die. Mary was born inheritently fallen with original sin as all of Adam’s children, and the nature of fallen humanity is to die. It was the second hypostasis of the Trinity who took from Mary our common nature and made a new human, without original sin. If Mary was born immaculately, without original sin as the Roman Catholics suppose, then Mary did not have our common nature, and God took Mary’s nature, not ours, and joined it to Himself, crucified it, and resurrected it. Mary would then be the savior of humanity, not Christ, since she would be born without the fallen state which only Christ’s birth, death and resurrection could heal. There would be no need for Christ to be born, since humanity would already be saved. But Mary herself needed to be saved.

Mary was completely human like us. But the Mother of God struggled hard to protect her purity. The Mother of God promised herself to God alone, and vowed not to marry. This was an exceptional vow for a Jewish girl of that time. The Jewish nation saw the bearing of children as a blessing, since then the blood-line of the parents continues toward the establishment of the kingdom of God . Mary became worthy to bear God inside herself because of her purity. Nowhere has God become incarnate into creation, except in Mary. Mary became higher and greater than all of creation, since she contained the uncontainable God.

The icon of the Dormition depicts Mary lying on her brier. Behind her stands Christ in glory holding Mary’s soul in his arms like an infant, symbolizing Mary reborn into her glory. Surrounding her are the apostles and faithful of the church in Jerusalem. A man is sometimes depicted to represent the Jew Antonius who tried to interrupt the funeral procession and overturn Mary’s brier. He had his hands cut off by an angel, but he repented and was healed, and became a Christian.

Let us then, brothers and sisters in Christ, honor the Mother of God with a graceful feast. Mary is worthy of our veneration because of her struggle and love for God. And her assistance in our redemption. Let us remember her often and bring our prayers to her, since she is able to intercede for us. May the icon of the Dormition be for us an image of joy and hope, since we too share in the promise of redemption given to us by Christ through Mary.