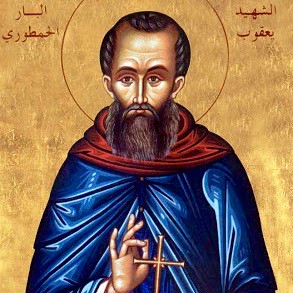 A national holiday, a newly revealed Lebanese saint, and Holy Fathers who defended icons once and for all fill celebrations in the Orthodox Church in October. The Liturgical Texts for this month, blessed by His Eminence, Metropolitan Joseph, are now ready for clergy and laity to download from the Online Liturgical Guide.

Each year, on the second Monday of October, Canada celebrates its Thanksgiving holiday as “a day of general thanksgiving to Almighty God for the bountiful harvest with which Canada has been blessed.” Its origin dates to 1578. For the holiday, the 18 Canadian churches of the Antiochian Archdiocese can offer Great Vespers on the night of October 10 and the Divine Liturgy on Thanksgiving morning, October 11, with special hymnography. On either day, parishes can offer “Glory to God for All Things: An Akathist of Thanksgiving.”

Martyred for the love of Christ on October 13, 1450, and glorified by the Church in 2002, St. Jacob of Hamatoura is one of Lebanon’s most beloved Orthodox Christian saints. Over the centuries, faithful clergy and laity who flocked to his Monastery of the Dormition of the Most Holy Theotokos of Hamatoura, Kousba, Lebanon would feel presence of this priest-monk and see visions of him there. This year, the Department of Liturgics has provided canons for St. Jacob at Orthros in English and Arabic.

Every year, on the Sunday that falls from October 11-17, inclusive, the Orthodox Church celebrates the 350 Holy Fathers of the Seventh Ecumenical Council, convened in Nicaea in 787. They refuted the Iconoclast heresy, whose camp believed that all depictions of Christ, His Mother and the saints should be destroyed. The council decreed that the veneration of icons was not idolatry because the honor shown to them is not directed to the wood, paint or paper, but passes to the prototype depicted therein.

​The Online Liturgical Guide, produced by the Department of Liturgics, provides the official, uniform word-for-word texts to be used for the divine services in all parishes across the Archdiocese. Should you have any questions, please email Subdeacon Peter Samore at OLG@antiochian.org.