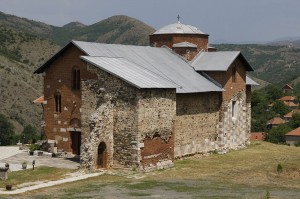 The Banjska monastery near Zvecan (Kosovo) marks the discovery of the holy remains of its patron, St. Stephen, and 700 years since the monastery was built.

The Banjska monastery, along with St. Stephen’s Church, was built between 1313 and 1317 and was founded by the Serbian King Stefan Uros II Milutin, one of the most powerful rulers of the Nemanjic dynasty.

Milutin built the church as his burial place and it is there that he was first laid to rest. However, following the Battle of Kosovo in 1389 his body was moved to Trepca and then in 1460 to the Bulgarian city of Sofia, where it lies to this day.

The Church of St. Stephen was built on the ruins of an older temple, which was the seat of the Orthodox Diocese of Banjska in the second half of the 13th century during the rule of Milutin’s father, King Uros I.

Banjska was built in the style of the Raska school, the facade is done in a combination of three-color marble and was richly decorated with stone sculpture.

The most significant preserved sample, a sculpture of Mary with baby Jesus, is now located in the nearby Sokolica Monastery.

The pride of the church was the so-called “Banjska gold” – frescoes in gold leaf of which only a few faded fragments remain.

In 1915 two gold rings were found in the grave of Queen Theodora, the wife of King Stefan Decanski and mother of Emperor Dusan. These rings are considered to be the most beautiful examples of Serbian medieval jewelry.

Archeological excavations, which are still in progress, have uncovered the entire area surrounding the monastery, including its outer walls and ancillary buildings.

The monastery had been in ruins for 520 years when new sleeping quarters were built on the old foundations in 2003.
On August 15, 2004, late Patriarch Pavle of the Serbian Orthodox Church led a consecration service.

St. Stephen’s Church remains in disrepair – the roof is giving in and rain and snow continue to damage the already dilapidated walls, and the walls in the dining room and sleeping quarters are also in poor condition.