However, there is in this prayer a verse that has caused and still causes much scandal: “I do not pray for the world.” Especially in our modern society with its values of permissivity and relativism, this saying of Christ causes scandal, and some even say that it is not Christian. Should we not pray for the world?
Fr. Roman | 15 May 2010 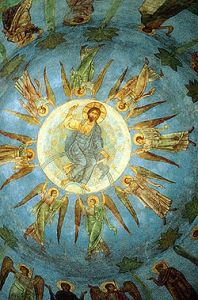 In this feast of the Ascension of Our Lord, the Church offers us as Gospel reading the Prayer of Christ as Priest, as St Cyril of Alexandria calls it and after him all the Fathers.

Today, on the feast of the Ascension, Christ stands before the throne of the Father; His prayer is not strictly speaking a prayer of intercession; it is rather a prayer of communion with God in His glory. Not only does Christ pray that communion with God be granted to His disciples and apostles, but to all generations of his disciples and apostles. Christ ascended into the heavens not as a spirit, but with His body of flesh. All the texts are emphatic that Christ stands in his own body of flesh in front of the Father. And because of this, through Him we and all mankind are ascending with Him and stand in glory before the Father. The curse of Adam and Eve is annulled and we are restored into Paradise.

However, there is in this prayer a verse that has caused and still causes much scandal: “I do not pray for the world.” Especially in our modern society with its values of permissivity and relativism, this saying of Christ causes scandal, and some even say that it is not Christian. Should we not pray for the world?

Let us first clarify several points. First: the prayer of Christ is a prayer of communion with God, and there is no way that a prayer of communion can be intended for those who refuse communion, who are outside the Church. When the priest prepares the Proskomedie, he puts particles of the holy bread, one particle for each name. With the Lamb, the particle for the Theotokos and those for the saints, this represents the Church, and only the names of Orthodox Christians can be placed on the discos because, very concretely, there is no communion outside. (It is in the same spirit that today we celebrate the communion of the Church by commemorating the Fathers of the first Ecumenical Council.)

This does not mean that we cannot pray for non-Orthodox; on the contrary we are asked to pray, to intercede for all; and we do it at all times. This is the prayer of intercession: the Church intercedes for all, even her enemies. But the Proskomedie, the Communion with the Body and the Blood of Christ, as all the sacraments, are prayers of communion. Imagine for example people who are persecuting Christ. They cannot be included in the prayer of communion because visibly they are not in communion. It would be a lie. But I can pray for them and beseech Christ to change their hearts and bring them to the faith.

And this leads me to the second point. By world, in this very case, Christ means those who have turned away from God and the Church, and therefore have placed themselves under the power of Satan. You are either for God or against Him; if you are against Him, you are on the side of the devil. We are asked to fight this world of evil, to challenge it; all of us according to our calling. For most of us this is done through a life of repentance. However, fighting evil is often difficult. On the one hand it should not foster hatred. On the other hand, to love does not mean to accept anything and everything. Christ chased the merchants out of the temple. However, nowhere does it say that He does not love them.

Third point, this world of evil is also inside all of us. Within each of us there is good and evil, light and darkness. We fight; we struggle against that which does not belong to God in us. We sin. We are sinners. That does not mean God does not love us. On the contrary God loves the sinners. Therefore He has appointed repentance and confession. And we return through the sacrament of Confession, and then we can again be in Communion. But as long as this has not been done, we are de facto excommunicated; we can cheat, be blind and have no fear of God, but God knows, and Christ cannot pray the Prayer of Communion for these people for they have sinned against the Holy Spirit.

Who are our enemies? First, they are those who have offended us and make us suffer; they persecute us, they try to remove the faith from us; they curse us. Secondly, they are those who say No to God, the enemies and persecutors of the Faith, those who are away from the truth, the apostates. We must judge and condemn their actions, but we must not judge nor condemn the people themselves: on the contrary we are asked to pray that they return to God.

However, the Fathers are very prudent. The prayer of intercession for the enemies is only for those who are more advanced in prayer. For they know that there are risks in such a prayer. Loving the enemies without discernment may lead to a form of solidarity with them, with sin and with evil. Or it can lead to a form of pride: “pity” instead of compassion.

Love of the enemy has several degrees; the first ones are accessible to all of us. Do not be the one to attack, and do not try to take revenge. Leave justice in the hands of God. These are the first two basic levels of the love of the enemy as underlined by St John Chrysostom.

The more advanced levels are: not to resist, as did the Martyrs. Show patience, endure, and suffer. Then not be afflicted, remain impassible, indifferent. A higher degree, which is the best way to progress in humility, is considering the offenses as a blessing. Therefore, rejoice if you are persecuted, offended, if people spit on you and despise you. And give thanks to God. Chastisement is education; it is a medicine. Another degree is to have no hatred for those who cause us harm, no anger, no resentment. Do not accuse your enemies, do not say bad things about them, but forgive in truth. Then God will pardon your own sins. St Symeon the New Theologian says that loving the enemies is forgetting the sufferings, forgetting what happened.

Without these first six steps, our heart cannot be sincere in praying for them. Only then, to love our enemies becomes seeking reconciliation with them. We can have compassion for them and pray for them. We can ask God with a true heart that they not be punished. We can ask that they be forgiven. If your heart can suffer for those who have persecuted you, as St Maxim the Confessor says, then true love of enemies has been given to you. And you may even feel affection for them and want to do them good.

Love of the enemies, which is a form of prayer of intercession, is acquired only after many steps of an incessant spiritual struggle. Without the grace of God we cannot do it. Pray that this Grace, which is the result of the prayer of Communion of Christ, be given to you that you may pray and intercede for others.

To Make the Spiritual Gifts Grow: On the 16th Sunday after Pentecost

In the Name of the Father, and the Son, and the Holy Spirit. I have already commented this…