“I Share the Cross of Those Who Suffer,” Says Syrian Orthodox Vicar of Aleppo

Source: Vatican Insider
Paolo Affatato | 10 November 2016
Having had a narrow escape from death, Raban Boutros Kassis, renews his appeal for the rescue of the martyr city, where there are 35,000 Christians remaining. He also remembers kidnapped priests. 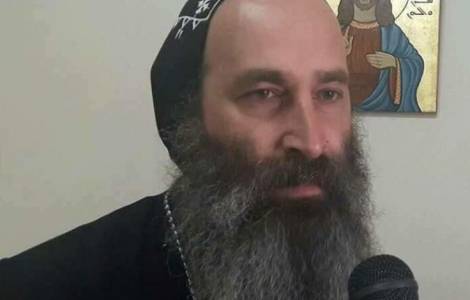 Staring death in the face is an experience that can awaken the faith even in those who do not believe in God. For the Syrian Orthodox Patriarchal Vicar of Aleppo Raban Boutros Kassis, therefore, this sensation was all the more intense and today he says he feels a profound closeness to Christ. Two days ago, he miraculously escaped death after a sniper shot at him as he travelled by car from Homs to Aleppo. He was shot in the shoulders twice. His driver managed to get him to San Luigi hospital, a Catholic establishment in Aleppo, one of the few structures still up and running and overloaded with wounded, mutilated and sick people. An emergency operation saved his life and today doctors say he is no longer at risk. In a telephone conversation, Raban Boutros Kassis talked to Vatican Insider about his life-changing experience.

How do you feel and what are your thoughts, after escaping near death?

I have a mix of different feelings swirling around in my heart. First of all I thank God for protecting me and keeping me alive. I was saved by miracle. And I thank God because in this condition and after this experience, I am able to share the cross of so many people who are suffering in Syria today, especially in Aleppo. People are wounded every day, there are people who have lost limbs and people who are sick, every day there is death. Today I can say I am happy to drink from the bitter cup of suffering, in communion with Christ and with the many innocent who are suffering. But in my heart I know that death is not the final word: the Resurrection is.

Can you describe what happened to you?

I was in the car with my driver, we were on our way back to Aleppo and were driving along the motorway south of the city. Suddenly, we saw some people shooting at us. Two of the bullets from the fire arms used by the snipers hit me in the shoulders. Thanks be to God they did not hit any vital organs. My driver raced me to the Catholic hospital of San Luigi, where the doctors, whom I am sincerely grateful to, operated on me immediately. That road is controlled by Syrian government troops but it is closed off in the evening because at night Daesh and Jubat Al-nusra terrorists strew it with mines. And it becomes a place of death.

The city is split in two and the conflict rages on. Civilians are the ones who are suffering. There are two million people in Western Aleppo. Assaults and attacks are a constant, especially in our neighourhoods. Our bishopric in Western Aleppo is very close to the front with the Eastern part of Aleppo. Mortar fire has hit us on a number of occasions and we are the fire of snipers. Attempted kidnappings also spread fear. This is why many locals, including Christians, have left Aleppo, especially those who have children. They don’t want to see them wounded, mutilated or killed.

What would you like to tell the international community?

All I can do is renew my appeal for this martyr city to be rescued. And ask for humanitarian aid. Aleppo has been under siege for over three years, the people who have stayed behind are suffering as a result of water, food, electricity and gas shortages. The Syrian government is doing what it can to try to guarantee basic health assistance and education. We as pastors stay in the city to be close to our flock, to feed and offer comfort to the suffering. We ask all foreign fighters and terrorists who are perpetuating the war, to return to their homes and we ask for all external interference in this war to stop.

How is the Christian community coping?

Christians share in the suffering of all other Syrians. There are around 35,000 Christians who remain in Aleppo. And they have made this choice with courage, in the face of immense suffering and discomfort. They show a visceral attachment and love for this place, this holy martyr city and they have that strength that only the grace of God can afford. On the other hand, however, we cannot blame those who have fled for the sake of their families. This week we registered 20 dead and 40 wounded among the Christian community alone. Before the war, there were around 250,000 Christians of all denominations in Aleppo. That means 80% of faithful have fled: that is a serious haemorrhage.

Do you have any special thoughts in the midst of your suffering?

I would like to remember the two bishops abducted three and a half years ago and entrust them to God: the Antiochian (Greek) Orthodox Metropolitan Paul Yazigi and the Syro-Orthodox Metropolitan of AleppoGregorios Ibrahim. We remember along with them the two priests Michel Kayyal of the Armenian Catholic Church of Aleppo and Greek Orthodox priest Maher Mahfouz. We still don’t know what happened to them. Let us hope they are still alive and pray for their release.