Shepherd of the Flock: not Butcher

Frustration with our own failures in the spiritual life has led us to the delusion that if we look authentically Orthodox, that if we have the correct icons, singing, fasting and services, then God's grace will somehow enter into us. In this scheme of things the services of the Church and prayer itself are reduced to magic formulae to grant us? not what God has desired for us? but what we have desired for ourselves. If we fail we believe that it is simply.
| 09 November 2009

There is a story told about a group of pilgrims who were touring the Holy Land with a guide who was native to the place. The guide was explaining how since time immemorial the shepherd did not walk behind his sheep but rather in front leading them and they followed him, just as the Lord describes Himself as the good shepherd: “…the sheep hear His voice and He calls His own sheep by name and leads them out. When He has brought out all His own, He goes before them, and the sheep follow Him, for they know His voice” (John 10:3-4). 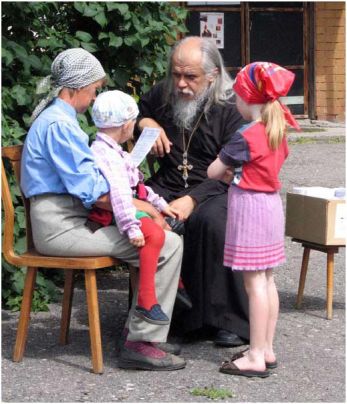 The Lord did not say to Peter, “be a great liturgist, discuss theology, rule over the faithful, be a great scholar, dress strangely, have long prayers or shun the world,” nor any of the other things that often typify the “work that is being done.” He says simply, “Feed My sheep.”

It is easy for all of us to forget that the task of the priesthood is to nourish the faithful of the Church? to “Feed My sheep.” There is simply no other way for the priest to show his love for Christ than to begin by showing it for the people for whom Christ died.

Frustration with our own failures in the spiritual life has led us to the delusion that if we look authentically Orthodox, that if we have the correct icons, singing, fasting and services, then God’s grace will somehow enter into us. In this scheme of things the services of the Church and prayer itself are reduced to magic formulae to grant us? not what God has desired for us? but what we have desired for ourselves. If we fail we believe that it is simply.

The great temptation for clergy today, in our times of spiritual emptiness, is to look romantically at the great elders and spiritual fathers of times past and imagine what it would be like if we could only have the gifts that they had. What we fail to realize is that [these fathers and mothers] received these gifts after long periods of intense spiritual prayer and longing with virtue and they knew the gifts that they had were of the Holy Spirit and not in or from themselves.

We often give to ourselves, in our imaginations, a cheap and easy grace, which springs from a desire to imitate not the lives and works of these saints, but simply their appearance.

The ministry of spiritual direction in the Orthodox Church is one that proceeds not from the grace we give ourselves but from the Holy Spirit: “The wind blows where it wills, and you hear the sound of it, but you do not know whence it comes or whither it goes; so it is with every one who is born of the Spirit” (John 3:8).

No one can study to become a staretz or elder or even a “spiritual father.” Those who announce that they are such and seek to impose their will upon members of their parish, intruding into personal lives and demanding an accounting of absences from services and so forth have fallen victim to the “lust for power” that St. Ephraim speaks of in the Lenten Prayer.

It is the butcher who drives the sheep; the shepherd who leads them.

The tradition of our Church teaches the importance for each of us to have a helper in the spiritual life, but the idea of blind obedience or domination is foreign to the life of the Church. [Please, please note this, all women who are exploited and over-directed by cultish priests.] Those who would feed the sheep of Christ must do so first by example and only secondarily by their words.

In North America the person who will serve as a spiritual father most often will be our parish priest. [However, this is left to our personal decision under God.] St. John of Kronstadt, the famous “pastor of all Russia” expressed his view of the pastor in these words that carry a message for both priests and faithful today: “A priest is a spiritual physician. Show your wounds to him without shame, sincerely, openly, trusting and confiding in him as his son; for the confessor is your spiritual father, who should love you more than your own father and mother, for Christ’s love is higher than any natural love. He must give an answer to God for you.”

The Lord commands Peter and all who follow in his footsteps, “Feed My sheep.” Those who are called to be the pastors or shepherds of the Lord must lead the flock of the faithful by being witnesses in their own lives of the Good News of forgiveness in the Cross of Christ and the hope of the Resurrection to all who seek the Lord in repentance and love.

“The Shepherd…goes before them, and the sheep follow Him, for they know His voice” (John 10:4).