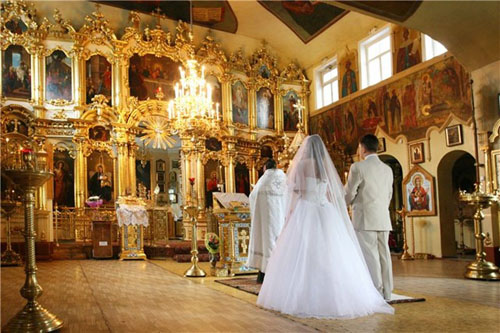 Q: Father Savva, please answer the following question. What should a woman do who has always been a practicing Christian and is now going to marry a man who fully suits her, and they love each other. He says he believes in God, but is neither a church-goer nor is he baptized or even interested in active Christianity.  He says that he is not interested in baptism which means that there will be no church wedding. What should she do? Should she refuse to marry him or do the unthinkable and give up the church marriage for the sake of their union? 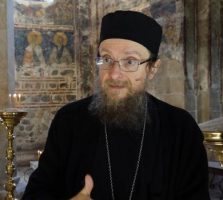 A: To be honest, this does sound like a problem. Our faith is not just a personal matter. It’s not like some hobby that our spouse may like or dislike. The Christian faith, if we treat it right, is the key element of our life. Everything we do, we do in the light of our faith in Christ. It’s the same with marriage. Marriage is not only a legal union of a man and a woman. It is not just a matter of reproduction. Above all, it is a sacred mystery, which implies that two believers decide to form a relationship, so that their life together as one body was an icon of life in Christ.

It’s different if you turn to Christ, while you are already in a civil (secular) marriage. In that case, with love and prayer you need to do everything possible for the light of faith to lighten the heart of your spouse.

Christians should view love between a man and a woman neither solely as a biological process nor as physical or mental attraction. Above all, marriage should be viewed as willingness to grow in common faith and love for God. Our faith teaches us that there is no true love for our neighbor without love for God.

There may be attraction, loyalty and other features associated with the biological nature of a person. Animals also have them. Love in the Christian sense is incomplete without love for God that unites spouses in a holy and mysterious way.

Concluding the above, if love and marriage are considered solely on the physical and mental levels, then, essentially, spouses will not be connected by the spiritual unity that is necessary to lead them to salvation and eternal life.

Speaking of this particular case, I think, patience is one thing this woman needs. The other thing she needs is to honestly tell the man she loves that her faith is a very important part of her personality. If he really loves her, then he must understand and accept her as an integral person, with whom he will share his life completely.

This is not simply a formal condition for him to fulfil by being baptized and marrying in church. It is very important that both of them clearly realize that they are not only connected by something external, but also they are spiritually close.

I emphasize that this is a choice that must be made before marriage. If the spouses are already married when one of them turns to God, then, of course, they should not stop living together. They need to continue family life, first of all, for the sake of their children and secondly for the sake of God calling to salvation the one of them who has not yet come to faith.

However, when two young people face the decision to start a married life, I think and testify in accordance with church tradition that it is not a good thing to deliberately marry a person who is not only far from faith, but also opposes God and His commandments.

Certainly, there is always the possibility of such life leading to the conversion of a non-believer resulting in a happy and blessed marriage, but unfortunately most often it is not the case.

Successful unions that have grown from carnal relationships into serious spiritual bonds in Christ can rather be considered rare exceptions than a rule, far less a model to follow.

I personally know spouses who began their family lives with a secular marriage. Later the conversion of one of them led to the conversion of the other resulting in their mutual decision to receive the blessing of the church for their life together. Today when there aren’t so many unbaptized souls, it is highly desirable for those Christians who wish to marry that their spouses are also believers. This way their union would be blessed from the very beginning.

The sacred mystery of marriage is revered and respected by the Church. However it makes sense only in the eucharistic context, as the union of a man and a woman who want to live their lives in a conjugal union in Christ and sharing everything also in Christ.  This is the essence of Christian marriage.

It may seem pure theory, but if our priority, before anything else, is life in Christ, then everything should be subordinate to it.

The problem with today’s secularized society is that faith is often viewed as a supplement to help us live our earthly lives better and happier. If things don’t go well, many are disappointed because they expected God to bring them happiness. This is a wrong point of view, because it looks upon life in Christ as a means rather than the goal of our existence.

Most viewed articles
How to Read the Bible169
Words from St. Isaac of Syria123
Patriarch Kirill Encourages the Media to Report Proper and Adequate Information about the Church119
Since the Start of the Pandemic Moscow Priests Have Made Over 4,000 Visits to Patients with COVID-1987
Archbishop Peter of Chicago and Mid-America in an interview to Poltava Diocese’s press service reveals interesting moments in the life of St John (Maximovich)84
“Do Not Weep”69
Best Films of the Pokrov Film Festival Have Been Determined45
Using Our Time Wisely to Cultivate the Seeds of Faith2
Christ the Life Giver1
Most popular authors
Pravmir.com team335
Archpriest Lawrence Farley169
Archpriest Stephen Freeman123
Archpriest Peter Olsen69
Priest Luke A. Veronis2
Fr. Theodore Stylianopoulos1