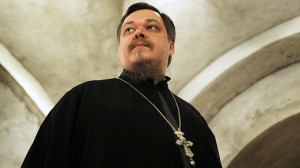 Archpriest Vsevolod Chaplin has praised Russian authorities for not caving in to pressure from abroad, saying granting asylum to US whistleblower Edward Snowden would help prevent the establishment of a ‘global electronic prison camp’.

“It is encouraging news that Russia is demonstrating its independence in this case as it has in many others, despite the pressure” said the head of the Holy Synod’s Department for Relations between the Church and Society.

Vsevolod Chaplin added that the Snowden saga has been broadly discussed both on the domestic and international level, with Russia’s position potentially bolstering its image as a country upholding “the true freedom of ideals.”

The Russian cleric further argued that Snowden’s revelations confirmed the existence of a pernicious problem discussed by Orthodox Christians for many years – “the prospective of a global electronic-totalitarian prison camp”.

“First they get people addicted to convenient means of communication with the authorities, businesses and among each other. In a while people become rigidly connected to these services and as a result the economic and political owners of these services get tremendous and terrifying power. They cannot help feeling the temptation to use this power to control the personality and such control might eventually be much stricter that all known totalitarian systems of the twentieth century,” Interfax news agency quoted Chaplin as saying.

The church official added that in his view true democracy remained an unreachable ideal.

“Any political system fixes the domination of a few over many. In the twentieth century the harshest forms of such political power used brute force, but now they are using soft power, through total data collecting and through soft persuasion of people, first through slogans but then through legal acts,” Chaplin explained. He noted that currently the soft power system was promoting such topics as declaring the western political system as the only viable option, making religion a marginal trend, and sidelining both criticism of market fundamentalism and leftist political platforms.

Chaplin urged Russian authorities to defend “real freedom, the freedom from the global ideological dictate and from the electronic prison camp.”

The cleric also offered a possible solution – the development of its own electronic communications system that would be independent from foreign-based mediums. “The nation has the brains for this and I hope we will also have a will,” Chaplin declared.

Russia is currently considering Edward Snowden’s request for temporary asylum and the former NSA contractor still remains in the transit zone of the Moscow’s Sheremetyevo airport.

The Russian Justice Ministry on Tuesday sent a formal response to a letter from US Attorney General, who assured Moscow that Snowden would not face the prospect of death or torture if handed over to the United States.

The Russian ministry did not provide the details of its reply to the press.