Society of St. Silouan of Athos makes pilgrimage to holy places in the Russian North 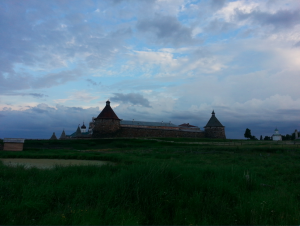 A group of the Society of St. Silouan of Athos made a pilgrimage to holy places in the Russian North from June 24 to July 4, 2013. Under the spiritual patronage of the Monastery of St. John the Baptist in Essex, Great Britain, the society unites Orthodox believers in Western European countries including England, France, Belgium, Germany and Switzerland.

The twenty pilgrims visited the Stauropegial Monastery of the Holy Transfiguration and hermitages in Solovki Archipelago. In the Solovki Monastery, they were received by its abbot, Archimandrite Porfiry (Shutov). In St. Petersburg, the pilgrims visited the St. Alexander Nevsky Laura, churches in Gatchina and Tsars’ Village and other holy places in the diocese.

With the blessing of Metropolitan Hilarion of Volokolamsk, the group was accompanied by Rev. Arseny Chernikin, staff member of the DECR, and Russian-French interpreter C. Jounievy.