Solovetsky Monastery, its Past and Present Day

The snow-white buildings of the Solovetsky monastery – a kind of spiritual fortress with its own laws and rules, with its own inhabitants, have been scattered on many islands in the White Sea in Russia’s North for centuries. However, the history of these sacred places begins in the 2nd millennium BC. The remnants of ancient sanctuaries and burial grounds are as numerous as the monuments to monasterial time are. The famous Solovetsky mazes, barrows and ridges keep guard to the mystery of old faiths and notions concerning the surrounding world that used to be embraced by the ancient inhabitants of the White Sea area. Monuments resembling Solovetsky sanctuaries can be found in the northeast of Scandinavia and on the Kola Peninsula. Whereas in Finland, Sweden and Norway these structures were destroyed with the introduction of Christianity, on the Solovetsky Islands they were preserved. That was a kind of dialogue between heathen and Christian cultures. We have inherited it in its primordial shape, and the unique environment of the Solovetsky Archipelago only strengthens the impression of the extraordinary northern civilization.

Since the first years of its existence, the Solovetsky Monastery – the heart of the Orthodox Church – has been an enclave of truly religious people. Solovetsky monks have entered into theoretical disputes with Moscow patriarchs and prelates more than once. History records have a mention of the revolt of the monks against reforms in the Orthodox Church introduced in the 17th century. The monks refused to accept the corrected church books brought from the mainland. No coercion could break their resistance. Finally Tsar Alexei Mikhailovich lost patience and confiscated the monastery’s mainland property. In response, the monks sent a letter to Moscow. It said: “If you, Your Majesty, do not wish to adhere to the old faith, order to punish us by sword and transfer us from this tumultuous life to a life eternal and tranquil”. In this way the monastery that no foreigners dared to attack rose against the authorities. The siege laid to the cloister continued for eight years. Finally, the monastery was overtaken, but its monks remained firm in their faith. 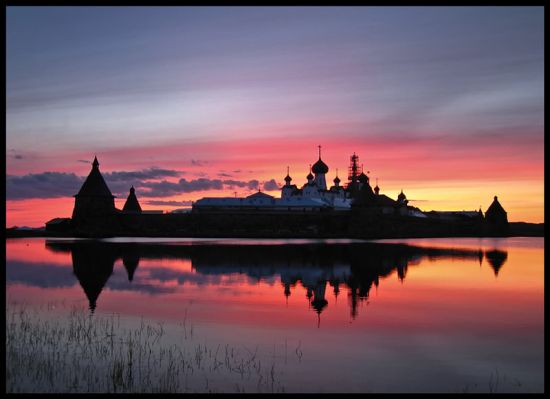 The history of Solovetsky fortress and monastery has many facets. The cloister outlived all Russian tsars and many patriarchs while remaining the spiritual bulwark of believers.

Perhaps the hardest time for the Solovetsky monastery was the 20th century, which saw World War Two, the mounting atheism in society, change of authorities and ideologies… In the 1920s the monastery was shut down and turned into a prison. A labour camp for political prisoners was set up on the Solovetsky Archipelago. It contained about 30,000 prisoners of more than 60 nationalities, many of whom were former army and navy officers, the gentry, intellectuals, clergymen, members of the political parties which tried to oppose bolshevism – anarchists, Mensheviks, social revolutionaries. The Solovetsky monastery saw the death of outstanding Russian philosopher, mathematician and priest Pavel Florensky and of many other prominent historians, writers, poets, musicians, scientists. Well-known Russian scientist, philologist, historian, philosopher and academician Dmitry Likhachev languished in Solovetsky dungeons. “What did I learn at Solovki? In the first place I realized that every man was a human. Criminals who are usually despised by society saved my life in the labour camp more than once,” the scientist wrote in his memoirs. Dmitry Likhachev, the last survivor of the Solovetsky labour camp, died in 1999, 60 years after the special prison ceased to exist.

Only in the early 1970 did the state pay attention to the unique historic and architectural monument, which had stood abandoned for over a half a century. The monastery was proclaimed a cultural preserve. And a decade later, on October 25, 1990 the Holy Synod led by Patriarch Alexi II decided to revive the Solovetsky monastery. Soon the relics of the Reverend founders of the cloister, Zosima, Savvati and Herman, were transferred there. Today not only the clerical authorities do much to rebuild the architectural monument. Russia’s Ministry of Culture worked out a special program for maintaining the sacred place of Russia’s North.

“Don’t fear Solovki, Jesus Christ is near them,” said well-known Russian artist Mikhail Nesterov with reference to the Solovetsky Monastery.