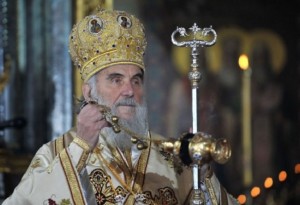 BELGRADE – The Office of the Serbian Orthodox Church (SPC) Patriarch has denied an allegation about SPC Patriarch Irinej being critical of top Serbian government officials during his meeting with Patriarch of Moscow and All Russia Kirill in Moscow on Wednesday.

His Holiness Serbian Patriarch Irinej, who is on a canonical visit to His Holiness Patriarch Kirill of Moscow and All Russia and the Russian Orthodox Church, was unpleasantly surprised to hear certain Serbian media outlets making the false allegation that during the talks with his host, he leveled criticism and accusations at Serbia’s most senior government officials, the SPC patriarch’s office said in a statement late on Wednesday.

The statement stressed that the misinformation is not only malicious and directed against the Church but also reveals that its writer’s aim was to disrupt the traditional brotherly relations and trust between the Serbian and Russian people.

“One of the main topics was indeed related to the problem of Kosovo-Metohija. Serbian Patriarch Irinej asked his host to support the position of the Serbian Orthodox Church about the preservation of Kosovo-Metohija within Serbia,” the statement said.

Everything else is a fabrication by certain political, media, and perhaps even para-church circles, who in pursuing their interests will spare no means to provoke a clash between the Church and the Serbian government, the statement added.