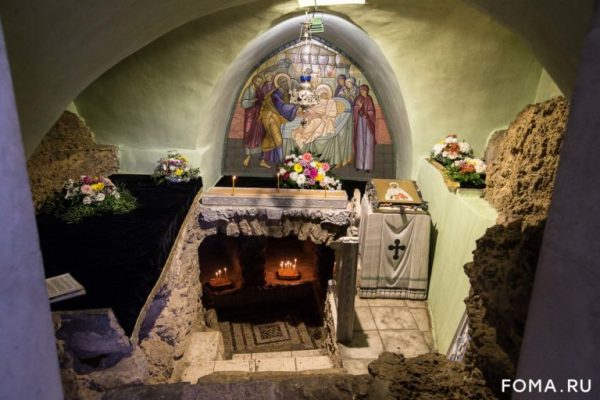 Today in the Orthodox Church we commemorate a saintly woman from the New Testament: St. Tabitha of Joppa.  Most of what we know about St. Tabitha and her life in the first century Church is what we read in the ninth chapter of the book of the Acts of the Apostles.  And while we remember her as one of several people in the New Testament who was raised from the dead, her greatest achievements lay in what she did in life, not in death.

We are often reminded that “beauty is only skin deep.”  But the real, eternal beauty a person possesses has very little to do with their physical appearance, although that may be hard to understand in our modern times.  Social media has made it possible now for anyone to show off their beautiful bodies, clothing and homes.  These so-called “influencers” make a living online by selling to others their personal “secrets” on how to become just as beautiful as they are.  Billions of dollars are spent in this country by both men and women seeking to gain or maintain their youth and beauty through surgery and other medical procedures.  The United States, and I would dare say the entire world, has lost all perspective on what it means to be beautiful.

Having a look at the account of St. Tabitha in the Acts of the Apostles (Acts 9:36-42), we see certain things about St. Tabitha that we may easily take for granted.  The name “Tabita” in Aramaic and Hebrew means “gorgeous,” “graceful” or “gazelle.”  The Greek translation that St. Luke provides, Dorcas, has a similar meaning.  The impression that we are given of this woman is one of beauty and grace.  Yet there is nothing in the New Testament account that gives any indication of St. Tabitha’s physical appearance.  Was she beautiful and graceful like a gazelle?  Some traditions refer to her as a widow, so could she have been an older woman?  Was she tall or short; pretty or homely?  There is nothing in the Epistle to provide any indication.

But with a closer examination of St. Luke’s account, we can see the true meaning of beauty and grace, one that is often not accepted by the world.  We are first told that Tabitha “was full of good works and charitable deeds which she did” (Acts 9:36).  These works and deeds became evident by the reaction of those people who were mourning for St. Tabitha in the upper room at Joppa when St. Peter arrived on the scene: “And all the widows stood by him weeping, showing the tunics and garments which Dorcas had made while she was with them” (v 39).  The benefactors of St. Tabitha’s good deeds were the widows of the Christian community.  St. Tabitha was providing a basic need for the most vulnerable of her society.  St. James would state in his epistle that supporting the widows and orphans is a demonstration of our “pure and undefiled” worship of God:

“Pure and undefiled religion before God and the Father is this: to visit orphans and widows in their trouble, and to keep oneself unspotted from the world” (James 1:27).

Our Lord calls out clothing those in need as an important act of Christian charity which demonstrates our love for God as well as our neighbor:

These acts of love, mercy and charity represent beauty that is more than just skin deep; it is beauty that reaches our very soul and has the power to influence others who witness these demonstrations of true Christianity.

This contrast between physical and spiritual beauty can even be seen in the parable of Lazarus and the Rich Man from tomorrow’s Gospel.  In this parable, the rich man represents all that is beautiful in the worldly sense: he “was dressed in purple and fine linen and lived in luxury every day” (Luke 16:19).  And what about Lazarus, the beggar who sat at the rich man’s gate?  St. Luke does not paint a picture of beauty but one of ugliness.  The parable tells us that Lazarus was “covered with sores and longing to eat what fell from the rich man’s table. Even the dogs came and licked his sores” (Luke 16:20).  Obviously, the world was not kind to poor Lazarus. But the Lord then turns our understanding of beauty on its head when He tells us that it is Lazarus, the ugly beggar, who ends up in the “bosom of Abraham” as the rich man languished in Hades (v. 23).  The rich man did not possess the spiritual beauty that would have made him worthy of being a child of God and thus enjoy a place in the Father’s kingdom. Jesus tells us that His Father’s house has many rooms (John 14:2), but these rooms are reserved for those who possess the inner beauty that only comes from living a life of love and charity.

What will be the reaction of the mourners at our funeral?  Will they comment on our physical or our spiritual beauty?  Their reaction will speak volumes not only about how we will be remembered in life but also in death.  The widows in the upper room at St. Tabitha’s funeral were weeping for the loss of a beautiful soul who put the needs of others before her own.  The impact she had on her community was felt by those who were in the greatest need.  The widows, standing around St. Peter, showed the tunics and garments that St. Tabitha had made, demonstrating that she was a woman who put her love for others into action.  Her handiwork provided a living, not a dying testimony to the spiritual beauty that we should all try to emulate.

A fitting description of the life of St. Tabitha can be found in the Troparion to the saint who we commemorate today:

What a glorious way to be remembered throughout the centuries!  We should never forget that physical beauty will fade with age, but the beauty of a life lived for Christ through service to others will never grow old.  May we all emulate St. Tabitha and be known in both life and death by “the light of our works” and the radiance of our grace.