People often refer to Thomas as “doubting,” not really considering the depth and the height of the “doubt” of this holy apostle. But let us look more carefully at this man. Was his doubt the same as that of the Judeans who yelled about the Savior Whom they crucified, “Let Him come down now from the cross, and we will believe in Him.” (Matthew 27:42); or was it similar to that which we hear from our contemporaries: “If there is God, let Him show Himself to all, and we will believe in Him and live happily ever after”?
| 25 April 2009

All of Bright Week we lived in the Paschal joy in the risen Savior; and our joy, just like that of the holy apostles, was mixed with confusion: not long ago we had remembered the death of Him Who is the Source of life, but now we rejoice, having been raised to life by Him Who had been in the tomb.  Just like the holy disciples and apostles during the first days after the resurrection, we vividly remembered the passions of Christ during the reading of the 12 Gospels; the Lord’s death and the taking down of His Body from the Cross, which we symbolized by the bringing out of the shroud; the Savior’s burial, when we carried the shroud in a procession around the church; and the long hours awaiting the miracle on the Saturday of Great Stillness.

Although from the very early morning on the day of the resurrection the good news of the resurrection was carried throughout creation, and even though angels from heaven (Mark 16:6) and holy myrrhbearers on earth (Luke 24:9) and even the guards at the Sanhedrin (Matthew 28:11) had already told of the miracle, the apostles were still in a state of fear and doubt, hiding behind doors and locks “for the fear of the Jews” (John 20:19).  The disciples’ doubt is not surprising, for they were witness to the greatest miracle in the history of creation: humans killed God, and then He rose from the dead and saved the dying human race from the claws of hell.  The disciples of Christ, after their teacher’s arrest, forgot all of His prophesies concerning the things about to take place.  They did not believe the miraculous story of the holy myrrhbearers (Mark 16:11, Luke 24:11), and even while talking to the Risen One face to face, they hesitated to trust their own hearts (Luke 24:25) which were burning and trembling in the presence of God (Luke 24:32).  This marvelous unbelief (Luke 24:41), human weakness, incapable of encompassing the magnitude of the miracle that took place, is reflected in the famous words of the Apostle Thomas: “Unless I see the nail marks in his hands and put my finger where the nails were, and put my hand into his side, I will not believe it.” (John 20:25)

People often refer to Thomas as “doubting,” not really considering the depth and the height of the “doubt” of this holy apostle.  But let us look more carefully at this man.  Was his doubt the same as that of the Judeans who yelled about the Savior Whom they crucified, “Let Him come down now from the cross, and we will believe in Him.” (Matthew 27:42); or was it similar to that which we hear from our contemporaries: “If there is God, let Him show Himself to all, and we will believe in Him and live happily ever after”? 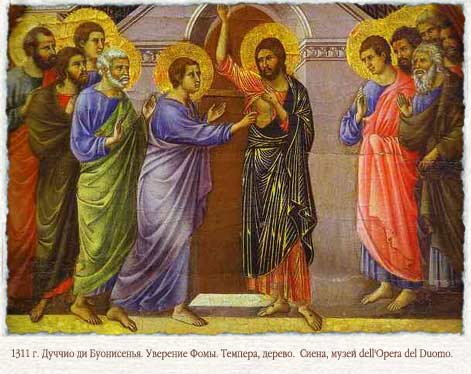 The ancient scribes and Pharisees knew about all of Christ’s miracles and, it appears, guessed Who Jesus of Galilee really was.  But every time they were faced with the Divine, they became even more rooted in blasphemy.  Having found out that Christ had healed a man born blind, instead of lifting praises they spewed curses: “This man is a sinner (John 9:24), [and] you were steeped in sin at birth” (John 9:34).  Having heard that Christ had resurrected a four-day-old already-smelling dead man, and, apparently, not having any more doubts about Christ’s divinity, the elders of the nation decided “to kill Lazarus as well” (John 12:10).  Finally, after being faced with the fact of Christ’s miraculous resurrection, and having heard the eyewitness accounts of the guards (Matthew 28:11) who had fallen on the ground trembling in the presence of a shining angel (Mathew 28:4), the elders bribed the soldiers and deceived the people (Matthew 28:12-14), further deepening their blasphemy.  Don’t modern Pharisees also only further deepen their blasphemy, having come face to face with the Risen One and not being convinced even by the miracles?

But Saint Thomas is not one of them.  We know about his faithfulness and sacrificial love for his Teacher.  After following the Savior for three years, Thomas understood very well the danger Christ faced from the scribes and the Pharisees.  The other disciples also understood it very well; that is why when the Savior decided to go to Jerusalem, the apostles tried to talk Him out of it, warning Him of the danger (John 11:8).  But it was St. Thomas who said, “Let us also go, that we may die with Him” (John 11:16).  One does not often hear such words from a doubter!  After the Ascension of the Savior, the Apostle Thomas, according to the Church Tradition, went to preach the Gospel in one of the furthest and most difficult to reach places of the ancient world—India, where he was tortured and killed for Christ.

But on that day, a week after the Resurrection, when the Savior came to His disciples and Thomas was with them, the holy apostle needed only a push, only a step, in order for this disciple who so selflessly loved his Teacher to realize to Whom he had devoted his life.  “My Lord and my God!” exclaimed Thomas, who only a minute earlier had been understandably doubting the accounts of his brethren.  “My Lord and my God!” exclaimed Thomas from the bottom of his loving heart.  To such a person as Thomas God comes.  This is the kind of person that He allows to touch Himself!

In His desire to save people, Christ suffered everything: mocking and scourging, torture and shameful death, and even others poking at His wounds with their fingers after His glorious resurrection.  If He is awaited, Christ will even go through closed doors (John 20:26).  But what will He hear having entered our heart?  Will He hear from us the words “my Lord and my God” or will He only receive mocking and scourging?  Will we worship Him, as did St. Thomas, or will we crucify Him with our lack of repentance and hurl the rocks of our sins at Him?

Lord, through the prayers of the holy Apostle Thomas, give us faith and help our unbelief (Mark 9:24)!