Every day during the week of Easter, called Bright Week by the Church, the paschal services are celebrated in all their splendor. The Easter baptismal procession is repeated daily. The royal gates of the sanctuary remain open. The joy of the Resurrection and the gift of the Kingdom of eternal life continue to abound. Then, at the end of the week, on Saturday evening, the second Sunday after Easter is celebrated in remembrance of the appearance of Christ to the Apostle Thomas "after eight days"
admin | 29 April 2006 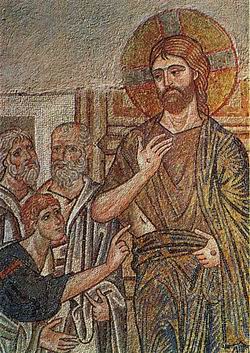 Every day during the week of Easter, called Bright Week by the Church, the paschal services are celebrated in all their splendor. The Easter baptismal procession is repeated daily. The royal gates of the sanctuary remain open. The joy of the Resurrection and the gift of the Kingdom of eternal life continue to abound. Then, at the end of the week, on Saturday evening, the second Sunday after Easter is celebrated in remembrance of the appearance of Christ to the Apostle Thomas “after eight days” (Jn 20:26).  (Fr. Thomas (Hopko))

The word Antipaskha doesn’t mean “contradiction” or “opposition” – in this word the meaning is “instead of”: thia day continues and repeats th a certain extent the greatest Feast of the resurrection of Christ.

After His Resurrection, Jesus appeared to His Disciples: He miraculously entered a locked room, and showed them His wounds. Then He ate and drank with them, proving that He was not a ghost or a phantom, but that He was really Jesus the Christ, in the flesh.

St. Thomas was not with the rest of the Disciples in the room. When he returned, the others excitedly told him that Jesus had visited them. Thomas doubted their story – the bodily resurrection of Christ.

So the Lord appeared again, and invited Thomas to put his fingers in His side and touch the wounds made by the nails. Thomas did, and after seeing (and feeling) for himself, he finally believed. He cried out: “My Lord and my God!” and fell at Christ’s feet. Christ told Thomas that He was glad that Thomas no longer doubted, but also lamented: “Because you have seen Me, you have believed. Blessed are those who have not seen, yet believed!”

Christ uses Thomas’ doubt to teach both the Disciples and us that we don’t need to physically touch Him to have faith. But upon hearing of Christ, we can be spiritually moved by His presence to follow Him, and trust in His promise that all men will be raised on the day He appoints for judgment, and know either the eternal joy of being reunited with God or the torment of being without Him.

St. Peter heard and understood, as he writes to his flock (I Peter 1:8): “You did not see Him, yet you loved Him; and still without seeing Him you are filled with a joy so glorious that it cannot be described, because you believe; and you are sure of the end to which your faith looks forward, that is, the salvation of your souls.”

It is the custom in some Orthodox parishes to travel to the cemetery on this day to pray, light candles, and to sing “Christ is Risen!” to deceased family members. If your parish does this, make sure to take your children even if you don’t have any family members buried there. They need to learn that we Orthodox pray for the dead. If your parish does not so this, you and your family can go on your own, say a prayer for the dead listed in most prayer books, and sing “Christ is Risen!” Be sure to take and light candles at each grave you visit.

To-day we are keeping the day of St Thomas the Apostle. Too often we remember him only as a doubter; indeed he is the one who questioned the message which the other Apostles brought to him when they said: Christ is risen! We have seen Him alive!

But he is not one who doubted throughout his life or who remained unfaithful to the fullness of the divine revelation of Christ. We must remember that when the Apostles and the Lord heard of the illness of Lazarus, Christ said to them: Let us return to Jerusalem. To which the others said: But the Jews wanted to kill you there. Why should we return? Only Thomas the Apostle answered: Let us go with Him and die with Him. He was prepared not only to be His disciple in words, not only to follow Him as one follows a teacher, but to die with Him as one dies with a friend and, if necessary, for a friend. So, let us remember his greatness, his faithfulness, his wholeness.

But what happened then when after the Resurrection of Christ, the Apostles said to the one who had not seen Christ risen, that they had actually seen the risen Christ? Why did he not accept their message? Why did he doubt? Why did he say that he must have proofs, material proofs? Because when he looked at them, he saw them rejoicing in what they had seen, rejoicing that Christ was not dead, rejoicing that Christ was alive, rejoicing that victory had been won. Yet, when he looked at them he saw no difference in them.. These were the same men, only full of joy instead of fear. And Thomas said: Unless I see, unless I probe the Resurrection, I cannot believe you.

Is it not the same thing that anyone can say to us who meets us?

We proclaimed the Resurrection of Christ, passionately, sincerely, truthfully, a few days ago. We believe in it with all our being; and yet, when people meet us in our homes, in the street, in our place of work, anywhere, do they look at us and say: Who are these people? What has happened to them?

The Apostles had seen Christ risen, but the Resurrection had not become part of their own experience. They had not come out of death into eternal life. So it is also with us; except with the saints, when they see them, they know that their message is true. What is it in our message that is not heard? Because we speak, but are not. We should be so different from people who have no experience of the living Christ, risen, who has shared His life with us, who sent the Holy Spirit to us as, in the words of C.S. Lewis, a living person is different from a statue. A statue may be beautiful, magnificent, glorious, but it is stone. A human being can be much less moving in his outer presence, yet he is alive, he is a testimony of life. So let us examine ourselves.

Let us ask ourselves where we are. Why is it that people who meet us never notice that we are limbs of the risen Christ, temples of the Holy Spirit? Why? Each of us has got to give his own reply to this question. Let us, each of us, examine ourselves and be ready to answer before our own conscience and do what is necessary to change our lives in such away that people meeting us may look at us and say: Such people we have never seen.