With an Amendment brought to Parliament by ministers Yannis Stournaras, Konstantinos Arvanitopoulos, Kyriakos Mitsotakis and Michalis Chryssochoidis, all matters relating to the management and use of Greek Orthodox Church property will be governed from now on by Regulations issued by the Standing Holy Synod of the Church of Greece. 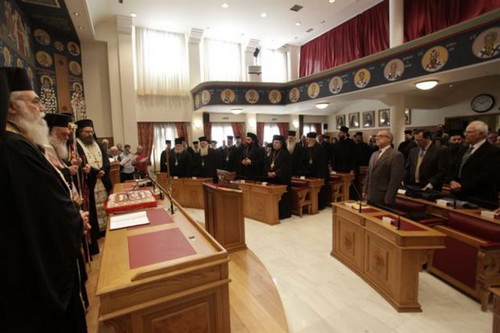 The Standing Holy Synod is the supreme authority in Greece, dealing with general church issues. It consists of the Primate, Archbishop Ieronymos II, and his bishops. Regulations concerning administration, management, control, preservation, recording and recovery of all Greek Church property will be passed by the Standing Holy Synod.

The Amendment alters existing law in which every change to the property of the Greek Church should be granted by the Standing Holy Synod and Holy Synod, and then published in the official journal of the Government of Greece.

The introduced Amendment also enables entities of the Church to form various companies, even sole proprietorship’s, so as to pursue their religious, charitable and cultural aims and to promote their activities. Lay persons are banned from participating in them for profit.

The ministers have also included in the Amendment several clauses clarifying the role of ecclesiastical public entities as opposed to governmental ones, so as to comply with the report of the European Court on Human Rights. According to this report, ecclesiastical public entities in other European countries are organized as non-governmental organizations and enjoy more freedom.

All these proposed changes are aimed towards improving the daily practice and charitable activities of the Church, as well as to preserve the autonomy and self-governance granted to the Greek Church by the Constitution, as stated in the Amendment.