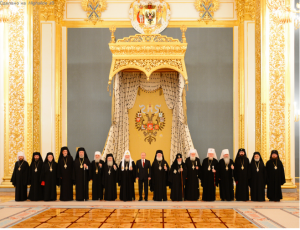 We, heads and representatives of the Local Orthodox Churches, who have come to Moscow on the occasion of the celebration of the 1025th anniversary of the Baptism of Russia at the invitation of Patriarch Kirill of Moscow and All Russia, consider it our duty to raise our voice in defense of our Christian brothers subjected to persecution for their faith in various parts of the world today.

Every day thousands of believers in Christ are being tortured and driven out of their native lands; many people meet their death.

News about tortures and murders are coming from Nigeria, Pakistan, Afghanistan, and India. In Kosovo, religious shrines are being defiled, many churches have been destroyed, and many people are deprived of the opportunity to visit the graves of their relatives and to pray to God in the land of their ancestors.

The situation in the Middle East causes deep concern. Many countries of this region are swept with a wave of violence and terror, with Christians falling victims to it. Libya, where there are almost no Christians left, is breaking into warring tribes. Terrorist acts go on in Iraq, where one tenth of the former one and a half million Christians has left. The situation in Egypt is getting more and more alarming as the conflict there has entered into another bloody phase and the Christian population flees the country in a mass exodus. Grief and sufferings have befallen families of thousands of ordinary people. As a rule, the first to suffer from unfolding conflicts are the most unprotected groups of the population including ethnic and religious minorities.

In September 2010, the first meeting of the Orthodox Primates of the Middle East region took place in Cyprus. The Primates expressed their deep concern over the situation in this region and the future of Christians in the area. The same concern was expressed at the similar meetings in Jordan in August 2011, in Constantinople in September 2011, and in Cyprus in March 2012. The statement in support of suffering Christians in the Middle East was adopted at the meeting of the heads and representatives of the Local Orthodox Churches, held in Moscow in November 2011.

The situation in Syria is particularly tragic today. In the heat of the fratricidal war, Christians, as well as representatives of other religious groups, are massacred, driven out of their native cities, towns and villages, out of the places where they used to live for centuries in peace with people of other religious traditions.

Paramilitary groups do not hesitate to use every possible means to achieve their goals. Their radical members carry it too far in their crimes. Horrific scenes of violence, public executions, humiliation against human dignity and violation of human rights have become habitual. Abductions and murders often committed for mercenary ends have become a common occurrence. Extremists do not stop at insulting religious leaders who have always enjoyed respect in the East.

The world mass media, as well as many politicians, are silent about the tragedy of Christians in the Middle East.

We express solidarity with His Beatitude Patriarch John X of Great Antioch and All the East who could not share our joy of celebrations today since he has to stay with his flock at the moment so difficult for them. Our prayers are with him and our brothers in Christ who are being killed all day long (Rom. 8:36).

We are grieving together with all the suffering people of Syria. We demand that the outstanding Christian hierarchs of Syria – Metropolitan Paul of Aleppo and Iskenderun and Syrian Jacobite Metropolitan Mar Gregory John Ibrahim of Aleppo be immediately freed.

We make this appeal to all the warring sides and those who can make a political impact on the situation: Stop the wave of violence and extermination of civilians! Impose a moratorium on the military hostilities so that a basis for peaceful settlement of civil conflicts could be worked out at the negotiation table! Free the captured clergy and other civilians!

As servants of the Almighty God, we ardently pray to the Author of Peace, the Lord Pantocrator that peace and love of brothers may be restored in the Middle East, refugees may come back to their settlements as soon as possible, the wounded may be healed and the innocent people who were killed may rest in peace. May the Lord inspire all those involved in the hostilities with wisdom and the good will to stop them!

Most viewed articles
The Truth About Riches179
The Muskox Response To COVID-19137
Metropolitan Onuphry Speaks on How to Protect One’s Soul From Sin104
Patriarch Porfirije Thanks the Russian Church for Participation in Restoring Serbian Churches97
Do We Act Differently Than Others?71
Strong Orthodox Presence at the 2022 March for Life56
March for Life participants optimistic for a post-Roe America: ‘This is just the beginning’54
Most millennials, Gen Z adults support bans on abortions when baby’s heartbeat is detected: poll51
Sunday of the Samaritan Woman2
Most popular authors
Pravmir.com team308
Fr. Gabriel Bilas179
Archpriest Michael Gillis137
Priest Luke A. Veronis70
Ryan Foley54
Maria Trushanina1