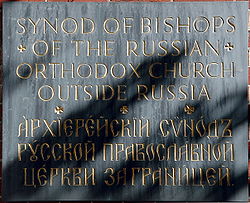 The Synod of Bishops of the Russian Orthodox Church Outside of Russia, having convened under the domes of Holy Trinity Cathedral in Toronto, Canada, within the holy presence of icons of the Most-Blessed Virgin, the Kursk-Root Icon of the Mother of God “of the Sign” and the Myrrh-Bearing “Softener of Hardened Hearts,” observes with alarm the unfolding events in the Middle East, in our thoughts kissing the podvigi [spiritual feats] of the persecuted Christians and new martyrs who sprinkle their blood upon the earth of their nation, which since ancient times has glorified the name of Christ. It is known that it was specifically the members of the Great Church of Antioch, the ancient followers of Christ, who first became known as “Christians.” And now their pious descendants are in danger, enduring persecutions for the faith of their forefathers. Anticipating armed intrusion into the boundaries of their country and condemning it, the Synod of Bishops calls upon all loyal children of the Russian Church Abroad to strengthened prayer for peace in Syria and the Near East, for all the persecuted and suffering for their faith in Christ, for the relatives of the victims who lay down their lives for God, the Church and their neighbor.

Standing in the presence of these miracle-working icons of the Mother of God and participating in the Church-wide celebration of the 400 th anniversary of the Romanov Dynasty in Holy Trinity Cathedral in Toronto, we beseech the Most-Holy Mother of God that the “Lord grant strength to His people and bless His people with peace,” the peace of which Christ told the Apostles before His sufferings, the peace that He left for them. May this Divine peace, unearthly and eternal, reign in the hearts of the Christians of the Near East and strengthen them, and also inspire in us devotion and love in further carrying out our service, our duties and our life’s cross.

Most viewed articles
As the End Draws Near – Silence158
A Stone Thrown at God and Your Neighbor103
How Can We Evangelize Today?99
Metropolitan Onuphry: “The Key to the Doors of Paradise is Repentance”85
Hierarchs of Three Local Orthodox Churches Concelebrate in Argentina68
Trial of Politician Defending Traditional Marriage Begins in Finland42
Patriarch Daniel prays for Romania’s national unity, peaceful coexistence and dignified cooperation with other peoples35
Most popular authors
Pravmir.com team195
Archpriest Stephen Freeman158
Protopresbyter Themistoklis Mourtzanos103
Frederica Matthewes-Green99
Aurelian Iftimiu35