Statement from the Diocesan Chancery on the Question of Homosexual Marriage, the Diocese of Chicago and Mid-America

DIOCESE OF CHICAGO AND MID-AMERICA 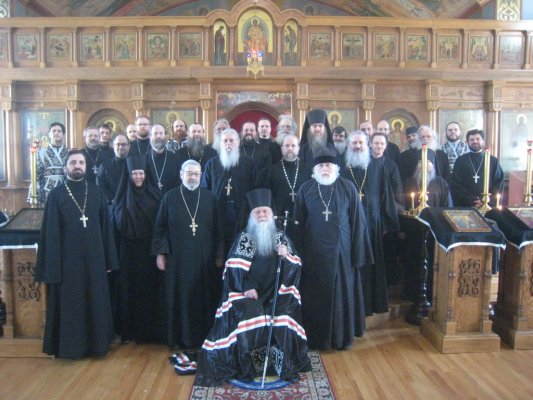 The Supreme Court of the United States is presently considering two cases which deal with the question of homosexual marriage. Given the ubiquitous coverage the news media is providing on this issue it is important that our clergymen and parishioners fully understand the position of the Church in this regard.

Living in a free society as we do, we should first be thankful that we have the opportunity to  practice our Orthodox Faith without inordinate interference from the government. In recent history this was not the case in Russia, and is still not the case in many countries throughout the world. In a free society all views can be shared in the public arena – both views we agree with as Orthodox Christians and those we disagree with. We call upon our flock to be guided first and foremost by the Holy Tradition of the Church in discerning whether any contemporary question is something that is compatible to the Orthodox faith. If an Orthodox Christian chooses to engage in public political discourse this should be done with moderation and with a firm intention and watchfulness not to fall into extremism. Extremism is not conducive to softening hearts or bringing others to the faith. Laymen who choose to engage in political speech should not state that they speak on behalf of the Church. Strictly speaking such an authoritative statement can be made only by a bishop or with a bishop’s specific blessing.

It should also be made clear that living a homosexual or any other sinful lifestyle is not compatible with Christianity and this has always been the teaching of the Church. That being stated, it is also crucial to state that the Church is a Spiritual Hospital and all those wishing to receive the healing freely offered by God through their repentance and God’s Grace are fully welcome. This includes those who have participated in immoral or unnatural acts of any kind as well as those who are tempted by such sins. The Church is empathetic to those who suffer in such a way and offers them support, healing, and Christian love. Those actively engaging in any immoral or unnatural pursuits cannot live a full sacramental life within the Church. However, this does not mean that we seek to drive away or ostracize those who have transgressed in such a  way. Rather, we must make all efforts to draw those in such an unfortunate situation back to chastity and the opportunity to again partake in the Life Giving Mysteries of the Church and to engage the struggle for their salvation within the parish community.

It is entirely possible that the decision will eventually be made to recognize homosexual marriage by the federal government. Several states have already made such decisions. Under no circumstances will the Church recognize homosexual marriage, accord it the status of traditional  marriage, or bless such unions. However, this is not to state that those who have entered into such a union have stepped beyond a line from which they cannot return. The Church has always strongly condemned heresies (such as Novatianism, Montanism, and Donatism) which deny the  possibility of repentance for those having committed certain sins. It is crucial that our clergymen not shy away from the position of the Church as regards the sinfulness of homosexuality and other unnatural expressions of the God-given gift of human sexuality – but it is also crucial that such statements be made with love and with a corresponding invitation to repentance and reconciliation with the Church.

We call upon all to pray for our land – that the Lord will forgive us our collective societal sins as well as our personal sins and provide us a safe haven which allows us to work out our salvation in peace.