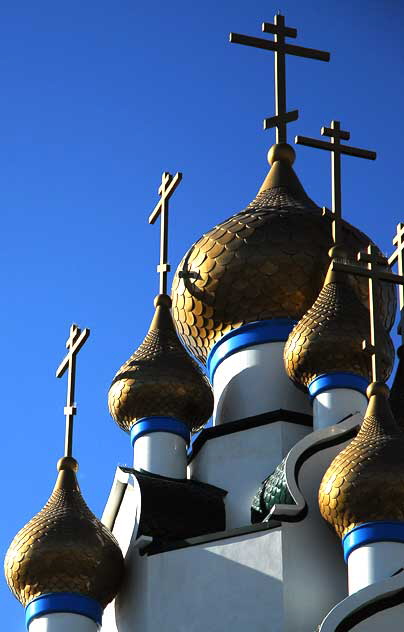 The Holy Transfiguration Russian Orthodox Church in Hollywood was burglarized Dec. 22 and police still have no clues as to whom the thief might be.

Police in Hollywood Wednesday asked the public’s help in finding a burglar who stole $50,000 in religious articles from the altar room of a Russian Orthodox church.

Among the articles taken were an enamel chalice, an antique chalice, a chalice set, crosses, cups, a ladle, a spear, stars and a baptismal kit, Lt. Mark Reina told Patch.

There was no sign of forced entry and police are unclear as to whether the suspect or suspects stayed in the church following a service and then targeted the altar room, Reina said.

Police also are not clear on how the thief or thieves got out of the church, since no windows were broken or doors forced, the lieutenant told Patch.

The only suspect description police could glean from a surveillance camera was that of an Asian man or Latino with black hair, standing about 5 feet 8 and weighing about 150 pounds.

He wore a dark jacket, possibly green, with dark pants, and carried a large duffel bag.

Anyone with information was asked to call the Hollywood Division at 213-972-2931. During non-business hours or on weekends tipsters can call 1-877-LAPD-24-7.

Photos of the sort of artifacts taken can be viewed on a Web page posted by the LAPD.