I remember as a kid often saying to my parents, "Hey! I didn’t choose to be here, you know." It was my cute teenage way of putting the blame for my questionable behavior on the ones who did make that choice: my long-suffering mom and dad. Gee, if I could make them see that this was all their doing, maybe I could circumvent whatever restriction was about to befall me. After all, I had a righteous argument: they chose to bring me into this world; I was just an innocent victim.
| 06 November 2009 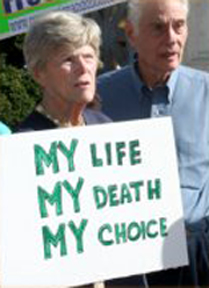 On January 18th, I read about the Supreme Court’s vote to uphold Oregon’s 1997 “Death with Dignity Act” (a.k.a. “assisted suicide”), a move that will surely slide the doors wide open for similar laws around our fair but befuddled nation. In the guise of ending the “senseless suffering” of a terminally ill person, it is nothing more than ending a life before that life was meant to end.

A week later, I marched with St. John parishioners and thousands more through downtown Austin in support of a fetus’ right to live (the verb has just a little more impact than its noun counterpart) and, conversely, in opposition to the current laws allowing its defenseless death.

I remember as a kid often saying to my parents, “Hey! I didn’t choose to be here, you know.” It was my cute teenage way of putting the blame for my questionable behavior on the ones who did make that choice: my long-suffering mom and dad. Gee, if I could make them see that this was all their doing, maybe I could circumvent whatever restriction was about to befall me. After all, I had a righteous argument: they chose to bring me into this world; I was just an innocent victim.

Not until many years later did I realize that my parents didn’t choose to have me. They merely decided to have another baby. My soul was created for my body by God, and it was He who chose the time and place for me to come into this world with the help of my parents’ physical bodies. A man and a woman join together to help create the body of a baby, but its soul, what makes me “me” and you “you” is much more than a genetic combination of X’s and Y’s. The soul is God’s creation. So my birth was all about me at that point and God’s plan for my life; as is every baby’s conception and entrance into this world. Contrary to popular thought, it is about the baby, not the parents. A parent’s choice is to accept His choice or not.

Last Sunday as I lit candles before the icons of the Theotokos holding her Son, Christ Jesus (in the form of a child), and the patron saint of our church, St. John the Forerunner (as a swaddled baby with his parents Elizabeth and Zachariah), I got chills thinking of the unparalleled impact these two little babies have had on our world. And of the choices Mary and Elizabeth made to be willing, albeit wonderstruck participants in His plan. And finally, of the spiritual consequences had each decided that it was her body, and her right to not be pregnant. Only God knew at that moment in time all that Jesus and John would experience for the sake of the world, just as He is the only one to know the reason why each of us is here.

And the only one to determine when our life is over. How does one stop “senseless suffering” by dying with dignity? Who is to know what your soul can learn through a painful dying process? I have never walked in those shoes, but I stood by as my husband watched each of his parents die agonizing deaths, and make choices that he would live with forever. And though I’m sure he would have cut off his right hand to save them from their suffering, I can’t imagine he would have formulated a plan with either of them to end their lives at a predetermined time.

How would they have decided the day and time? How would this be any different from any other form of suicide? How would they know her soul was ready to leave her body at the chosen hour? If we can’t fathom the mystery of its entrance into our body, who are we to presume our soul’s departure from it?

If the argument is about putting a merciful stop to pain that has no end in sight, what do we do with people like my aunt? For 50 years, she lived with schizophrenia; tormented by demons, horrific side effects of medications and invasive procedures, and even other patients. As a child, I observed many things that would stay with me throughout my life: my family’s compassion and unconditional love, her abandonment by her husband and son that would forever affect her psyche, the loving caregivers who dealt patiently with her, and the others who treated her like a disobedient pet. Through her suffering, I learned so many things, as did my children in their relationship with her. In the last 15 years of her life, she enjoyed peace with new medications, a caring staff, a supportive and loving family, and the grace of the Holy Spirit. Her suffering had more meaning than I could have ever imagined.

Whoever gave the Oregon law its euphemistic name “Death with Dignity” should have chosen a more accurate term, because “dignity” means “the quality or state of being worthy, honored or esteemed.” According to that definition, if there was anyone who died with dignity, it was Jesus. And yet He was in agony; scourged, stuck with a crown of thorns, bleeding from nails pounded through His hands and feet, naked in front of His mother and the few followers who stayed with Him. Humbly, he made one final request from His Father, but it was not to spare Him from the physical pain. It was to ask for forgiveness for those who had betrayed and crucified Him. And then He died for our sins.

So who are we to determine what is senseless suffering? Jesus’ agony, death, and resurrection gave life to our earthly purpose as Christians, because He didn’t look for the easy way out. He surely knew all that was to come, and yet even the Son knew that only God the Father could say when it would finally be over. Surely there is no clearer message than that to help us support or oppose the laws of the land.