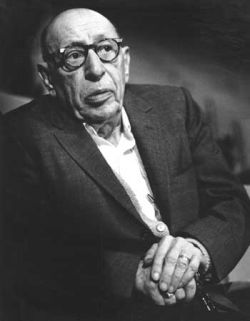 All throughout his life Igor Stravinsky refused to discuss issues of faith and his own religious affiliation, regarding this theme as too private for public discussion. So we shall be talking about his music. Some might be surprised: a man known to the entire music universe as “a citizen of the world”, who spoke, it would seem, all the existing music languages of the 20th century, who wrote in 9 languages (unprecedented in the history of music!!!) – he wrote Orthodox music?!!

Yes, he did! And in this the seemingly always paradoxical Stravinsky consciously followed tradition. There was not one Russian composer, who did not try his hand at writing at least one sacred composition!

Stravinsky was christened Orthodox Christian. However, in his early youth he was never particularly religious. After leaving Russia, especially at a time when he realized he was never to return – in 1917 the communists had come to power – he became a devout worshipper of the Orthodox Church. It’s a known fact that many Russians who found themselves far away from their native land, in enforced emigration, people who were not known for any strong religious sentiments, or not really religious at all – found solace in faith. Stravinsky never spoke publicly on the issue at all. However, we know that whatever country he lived in, Stravinsky invariably arranged his household in typical Russian, even somewhat patriarchal style. Three generations of family members seated at a large dinner table, nannies, that were by then part of the family, long cordial conversations, and solicitude and concern for even the most distant relatives…

In the 1920s the Stravinsky family lived in Nice at the time. Among the always numerous guests – Russian writer Grigory Adamovich. He recalled: “The Stravinsky family maintained a cordial and friendly household in Nice. I always knew that his intellect was sharp and always intolerant. An unexpected u-turn for me: from delight in political democracy – to extreme political conservatism. On the situation in the now-communist Russia: “What do we want with a Russia that is not Orthodox or autocratic!” Back then he became a follower of Emperor Alexander III, whom he perceived as the epitome of Russian grandeur. Religion, which he was once far removed from, became his solace and joy, while the rites and lofty grandeur of Orthodoxy – one of the sources or conditions of this joy.”

Some might say: these choral compositions were no more than an episode in Stravinsky’s art. He never wrote Russian church music afterwards; all of his life he addressed the genre of sacred music, but these compositions combined traditions of diverse religious confessions.

The fact is, the tradition of uniting musical canons of diverse religions was created by Russian composers of the 20th century. Cherepnin, Grechaninov, Kastalsky. Stravinsky never imitated anyone. Never in principle, and he didn’t in this case, either. Quite possibly, the searching proceeded along parallel routes…

…The celebrated “Symphony of psalms”, the year 1930. Written for the 50th anniversary of the Boston symphony orchestra. The choir sings in Latin. So what is Russian about it?

Imagine, initially Stravinsky conceived this symphony for choir and symphony orchestra in the familiar to him church-Slavonic language. Curiously, even some of the words in Latin are pronounced with non-standard emphasis: that’s because initially it was old-Russian language! – “Lord have mercy” – “Laudate Dominum”!

And the first part – it’s a triumph of Russian chimes, without which Orthodox service is impossible!

Even the very last sacred composition (and one of the last in his life) – “Requiem canticles” enters a dialog with Orthodoxy. United here are catholic and orthodox traditions of the requiem service…

“I want to pray in the language that I have grown accustomed to doing since childhood,” Stravinsky once said towards the end of his days.