Syria at threshold of religious war 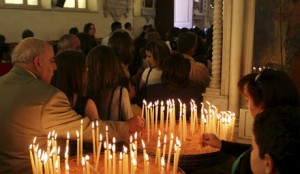 The “Open Doors” organization publishes reports about violence against Christians in various parts of the world every year. In the last year’s report, Syria was in the 36th place on the list of countries where Christians are persecuted. Now, it is in the 11th place.

The organization’s activists have collected information about many Christians who have been killed, kidnapped, or experienced physical violence in those regions of Syria that are now controlled by the opposition, which, to a large extent, consists of Islamists. Many Christian churches and monasteries in Syria have been desecrated, damaged or totally ruined.

“The appearance of this report is a very important fact,” Russian expert in Eastern affairs Boris Dolgov said in an interview with the Voice of Russia. “I hope that this document helps the world to learn more about violence against Christians in Syria and to start to seek measures to stop this violence.”

“I had a long talk with Mother Agnes-Mariam,” Boris Dolgov says. “She is very concerned that Christians in Syria are now persecuted by rebels. She knows of many cases when Islamists shelled Christian monasteries, kidnapped or killed Christian priests and expelled Christians from cities which are now controlled by the opposition – for example, from Homs. She showed photographs to me, where the consequences of these crimes were depicted.”

“Mother Agnes-Mariam says that many members of the Syrian opposition belong to Al Qaeda and other radical Islamist organizations.”

The report of the “Open Doors” organization says that if radical Islamists come to power in Syria, they may start to persecute Christians only because Christians are peace-loving and do not interfere in the conflict between the opposition and the government. This may either make Syrian Christians a very isolated community or make many of them flee from Syria.

Boris Dolgov agrees with this:

“If the most radical, Islamist part of the Syrian opposition comes to power, this would be a tragedy not only for Syria, but also for the entire Middle East,” he says. “Most likely, they would start killing Christians, Alawites, Kurds and representatives of other religious and national minorities.”

Alawites are a Muslim sect, whose beliefs on some points differ from those of Islamists. President Bashar Assad and his family are Alawites, and Alawites currently dominate in the Syrian government and occupy high military posts in the country. As for Syrian Kurds, they, as a rule, support President Assad or take no sides in the conflict between his regime and the opposition.

Recently, the Russian Orthodox Church also expressed concern about persecutions of Christians in Syria. The head of the Russian Church Patriarch Kirill believes that the conflict in Syria is, to a large extent, caused by ethnic and religious reasons. His Holiness says that the Russian Orthodox Church is ready to render humanitarian aid to Syrian Christians who have lost their houses or suffered in some other way from Islamists.