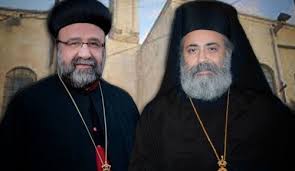 Syria’s Greek Orthodox faithful bore a heavy cross on Friday as they marked the crucifixion of Christ, their country ravaged by two years of war and two of their bishops missing after being kidnapped by unknown gunmen.

Good Friday is a day when even the least pious tend to join in its solemn prayers and processions, but churches in Syria’s capital, no longer safe from car bombings and mortar attacks, are unlikely to be full this year.

That was already the case on Holy Thursday, when streets leading to churches were blocked off and security forces out in numbers to protect the places of worship that one resident said were only sparsely visited.

“I won’t dare go to church tonight,” sighs Shaza, a mother who lives in the predominantly Christian and Druze neighborhood of Jaramana, lamenting that her children will miss the traditional parade by Scouts, which has been cancelled.

Yussef, a 30-year-old who lives in the Tijara neighborhood, said the “violence doesn’t stop. At dawn this morning I heard a loud explosion… It was the jet fuel depot at Damascus airport that was burning.”

Yussef was speaking just three days after a bomb blast in central Damascus killed at least 13 people and four days after Prime Minister Wael al-Halqi narrowly survived a car bomb that targeted him.

As the war between the regime of Bashar Assad and rebels fighting to oust the president gains pace, Orthodox in Syria are also praying for the safe return of Boulos Yazigi, metropolitan bishop of the northern city of Aleppo and brother of Yuhanna X Yazigi, their patriarch.

Yazigi and Aleppo’s Syriac Orthodox bishop,Yuhanna Ibrahim, were kidnapped by unknown gunmen on April 22 as they were returning home from a trip to Turkey. Their driver, a Syriac Orthodox deacon, and another passenger were forced out of the car and the driver murdered, shot in the head.

Their whereabouts and fate is still unknown in a country where Christian clerics have been murdered, but where kidnapping for ransom is also rife.

In October, Greek Orthodox Father Fady al-Haddad was seized and killed in Damascus province as he was trying to negotiate the release of a Christian doctor who had been kidnapped.

Theft and kidnapping have become rampant in Syria, where criminals have taken advantage of the security vacuum caused by the fighting.

Patriarch Yuhanna has announced that this Easter he will not receive traditional greetings from the faithful.

Antoine, a 47-year-old doctor, said the “atmosphere is sad. For the third year we will be celebrating Easter with sadness, because the country is bleeding.”

“We will pray for their return,” he said, adding that Good Friday prayers would be dedicated to them.

“We believe in the resurrection (of Christ) and also that of Syria.”

Gabriel, another Damascene, said that, this year, the “feast will boil down to just prayers, because blood continues to flow in our country.”

Some Syrians have left the country altogether to celebrate Easter, to get away from the violence and the fear, and Hala has rented an apartment in Beirut, the capital of neighboring Lebanon.

“I came to calm my nerves and to see my son, who works in Qatar,” she told Agence France Presse. “Life here is normal, and I try to forget for awhile the nightmare we are living in Syria.”

Christians account for about five percent of Syria’s multi-confessional population of Sunni and Shiite Muslims, and of Alawites, an offshoot of Shiite Islam.

While some may have fled the country and others are contemplating to leave, student Roula Salam, who lives in the central city of Homs, is defiant.

“Christians will remain despite all the hardships endured and everything used to chase us out,” she said, pointing out that Christian roots in Syria date back to the beginning of the faith, 2,000 years ago.