Antakya, Asharq Al-Awsat—A Syrian rebel group calling itself the Ahrar Al-Qalamoun Brigade has claimed to be behind the abduction of 12 Greek Orthodox nuns earlier this week. The Islamist group announced that it is prepared to release the nuns in return for the release of one thousand female detainees held by Syrian President Bashar Al-Assad’s government. 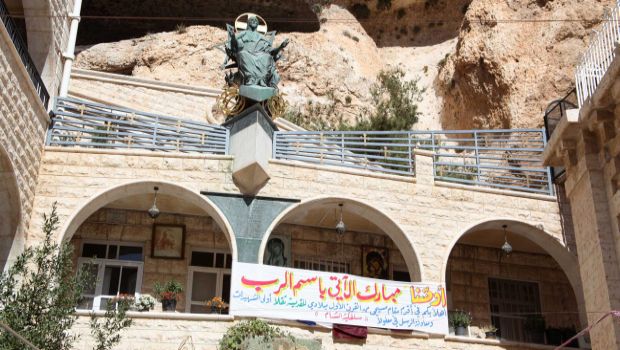 In exclusive comments to Asharq Al-Awsat, Mohannad Abu Al-Fida’a, member of the communication bureau of Ahrar Al-Qalamoun, said: “The nuns are in a safe place, but they will not be released until several demands have been met, most importantly the release of 1,000 female Syrian detainees from the Syrian regime’s prisons.”

Fida’a added that the group’s demands have been conveyed to the Assad regime via the Vatican. He revealed that Ahrar Al-Qalamoun had established contact with head of the St. Thecla (Mar Takla) monastery in Maaloula, Mother Pelagia Sayyaf, who in turn had contacted the Vatican by satellite phone.

Although Ahrar Al-Qalamoun is not a well-known group, Fida’a clarified that it enjoys strong ties with the Al-Qaeda affiliated Al-Nusra Front.

“These are joint demands from Ahrar Al-Qalamoun and the Al-Nusra Front,” he said.

Abu Al-Fida’a also revealed that “the Vatican requested that the nuns be transferred from Maaloula to a Christian household in Yabrud, but this request has been rejected until our conditions are met.”

The Ahrar Al-Qalamoun spokesman also informed Asharq Al-Awsat that the military commander in charge of the operation is Abu Mohamed, adding that commander Abu Azzam is responsible for the nuns’ safety.

The Orthodox nuns had been feared kidnapped on Monday after Syrian rebel groups, including Ahrar Al-Qalamoun and the Al-Nusra Front, recaptured the Christian town of Maaloula, north of Damascus, following three days of heavy clashes with Assad forces.

Initial reports were unclear as to whether the nuns, along with orphans in their care, had been forcibly abducted or evacuated for their own safety.

Abu Al-Fida’a told Asharq Al-Awsat: “The nuns have been transferred to a safe place following cooperation between Ahrar Al-Qalamoun and the Al-Nusra front, as Maaloula might be subject to bombing by the regime,” adding this had taken place in response to a Vatican request and denying that the nuns have been moved to Yabrud.

Sources also informed Asharq Al-Awsat that the Al-Nusra Front had included a number of other conditions for the release of the 12 nuns, including for the Assad government to suspend its siege on a number of strategic areas, including the Ghouta district of Eastern Damascus, allowing much-needed food and other aid to enter.

Syrian journalist Mohamed Al-Zehouri, who is currently accompanying the opposition battalions in Maaloula, said that he had personally met with the nuns. He said: “They are carrying on their daily lives and prayers as normal, but their movement is restricted.”

Zehouri, who is a field reporter who covered both the battles of Al-Qusayr and Qalamoun, warned that the nuns could be killed by regime bombing of the area.

Earlier this week, Catholic Pope Frances called for prayers for the 12 Orthodox nuns who were forcibly removed from their convent in Syria by rebel fighters.

He said: “I invite everyone to pray for the sisters of the Greek Orthodox monastery of St. Thecla in Maaloula, Syria, who were taken by force by armed men.”

“Let us continue to pray and to work together for peace,” the pope added.

Most viewed articles
Life Truly Genuine and Authentic in the Eyes of God107
Patriarch Kirill: “We Should Pray for Our Lord to Strengthen Fraternal Feelings of the Peoples of Holy Rus”90
How to Deal with Sin75
Holy Cincture of the Theotokos to arrive in France next week56
The Authenticity of the Vision of Christ in the Life of Saint Silouan55
The Bulgarian Church Can Canonize Its First Patriarch47
“The models par excellence are the great hesychast saints,” says Romanian Orthodox Bishop of Oradea41
Most popular authors
Pravmir.com team137
Fr. Theodore Stylianopoulos107
Archpriest Basil Ross Aden75
Aurelian Iftimiu56
Archimandrite Zacharias Zacharou55
Ștefana Totorcea41