Syrian and American Christians: A horror that binds 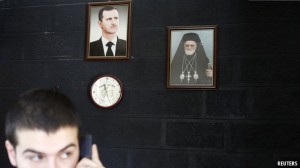 WHEN really tragic events occur, categories of people who previously didn’t feel much in common can find themselves coming together in a community of pain and indignation. Categories like….American Christians and Middle Eastern Christians, for example.

Yes, I meant to write that. Until recently, America’s politically engaged Christians, especially those on the right, seemed deeply ambivalent in their attitude to co-religionists in the Middle East. When Christian residents of Bethlehem and other West Bank towns complained that their land was being appropriated to make way for new Israeli settlements (including ones that the American government had deplored), they rarely found much much sympathy in the United States. Or take Iraq: the displacement of more than half of that country’s Christian minority in the mayhem that followed the 2003 invasion has received remarkably little attention in American religious circles. Nor have church-going Americans been much engaged with Lebanon, unless they belong to denominations with Middle Eastern links. And when they do try to make sense of Lebanon’s internal feuding (in which Christian militias have fought on different sides, and committed their share of atrocities), American church people haven’t felt any automatic loyalty to their Lebanese counterparts. Back in the 1980s when the Reagan administration was deeply engaged in war-torn Lebanon, protecting the Christian cause never seemed to be a stated American concern.

The horrors in Syria may have changed all that. At a hearing on Capitol Hill this week, called by Republican congressman Chris Smith, campaigners who testified about the sufferings of Christians and other religious minorities in Syria found a very sympathetic audience. News of that hearing, and of some horrific recent incidents in which clerics were reportedly beheaded, killed and targeted for assassination, have been circulating furiously in the American religious media, electronic and otherwise. In part, this concern is fueled by partisan point-scoring. Arming the wrong people in Syria is being portrayed as one of the many sins of the Obama administration, along with socialist health-care and undermining marriage.

Politics aside, there is of course plenty to be concerned about. In recent days, a stomach-churning video (since taken off YouTube) has been circulating that appears to show a Syrian Christian priest, and another man, having their heads cut off with a small knife before a cheering crowd in a rebel-controlled area. The Roman Catholic authorities have reportedthe death of a Franciscan monk during a raid on a monastery in the north of Syria on June 23rd. Yesterday there was a suicide bombing outside the headquarters of the Greek Orthodox Patriarchate (pictured) in Damascus that killed four people who were queuing for food. The Patriarch, John X, had entered the premises shortly beforehand and the bombing may have been aimed at him. The Patriarch’s brother is one of two bishops from Aleppo who were kidnapped in April; the absence of any concrete news about them seems deeply worrying.

In testimony to the congressional hearing, Nina Shea, a religious-freedom watcher with the Hudson Institute, said that Syria’s Christians “are not simply caught in the middle, as collateral damage. They are…targets of an ethno-religious cleansing by Islamic militants and courts. In addition they have lost the protection of the Assad government, making them easy prey for criminals and fighters, whose affiliations are not always clear.” She quoted a Christian bishop as saying: “Christians are terrified by these (Islamist) militias and fear that in the event of their victory they would be…forced to leave the country.”

All these reports are getting a wider hearing in America than has any other recent chapter in the turbulent history of Christianity in the Middle East. Particularly in the measured form delivered by Ms Shea, who by no means ignores the misdeeds of the Assad regime, they are well worth the attention of all outsiders, Christians or otherwise, who claim to care about the region.

Most viewed articles
On Feeling Forsaken170
Patriarch Kirill: We In No Way Question the Healing Power of the Holy Mysteries of Christ!134
Ethiopian Patriarch Thanks Patriarch Kirill For the Support During the Persecution107
Maronite Patriarch Thanks Russian Patriarch for His Support for Christians in the Middle East99
Food for the Journey68
The pandemic is a significant examination for us all, Transylvania Metropolitan says47
Fire Destroys Main Building with the Church of St. Peter Convent in Pavlodar46
Athens and Jerusalem: the Role of Philosophy in Faith, with Analysis by St. Gregory Palamas25
Sunday of the Samaritan Woman1
We Are Not Saint Mary of Egypt (But We Can Still Repent)1
Most popular authors
Pravmir.com team387
Archpriest John Moses (+2019)170
Dcn. Michael Schlaack67
Aurelian Iftimiu47
Eric Hyde25
Archpriest Geoffrey Korz1